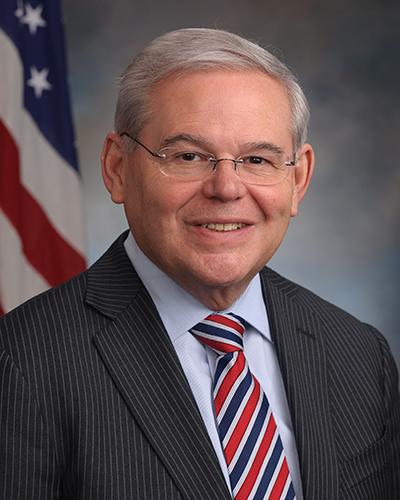 A three-term United States Senator representing New Jersey, Senator Bob Menendez’s story is quintessentially American. He grew up the son of Cuban immigrants in a tenement building in Union City, N.J. and rose to become one of 100 United States Senators. Senator Menendez was originally appointed to the U.S. Senate in January 2006, elected to a full six-year term in November of that year, and re-elected in 2012 and again in 2018.

He currently serves as Chairman of the Senate Foreign Relations Committee for the 117th Congress— one of the oldest and most revered Committees in the Senate—at a time when world affairs have a dramatic impact on our economy at home. He has earned a national reputation for his international leadership in the Senate, which pairs with his long-time reputation as a fighter for New Jersey families who puts their economic security ahead of powerful special interests.

As Chairman of the Senate Foreign Relations Committee, he has established himself as a new foreign policy leader for a new century, seeking to do globally what he has done in New Jersey – supporting the most vulnerable in our society and lending a voice to those least able to speak for themselves. As Chairman, he has focused the Committee’s work on key foreign policy issues of the day including strategic competition with China, confronting the global pandemic, and restoring the United States’ place as a leader around the globe. He has stood by democracy activists struggling to reform governments from Cuba to China to Russia and advocated for women and children struggling against oppressive poverty in Central America and sub-Saharan Africa. In addition, he has evoked a strong national security posture in the face of tyrannical leaders of Russia, Iran, Syria, and Venezuela

In April 2021, Chairman Menendez successfully concluded a decade’s long effort for the U.S. government to officially recognize the Ottoman Empire’s genocide against the Armenian people.

Senator Menendez has been widely recognized for his leadership on promoting safe and healthy families. He has championed legislation to support mothers suffering from postpartum depression, help families meet the challenges of autism, and keep young athletes safe from harm on the playing field. He also serves on the Senate Banking, Housing and Urban Affairs Committee and has championed increased consumer protection and corporate accountability, fairness in lending, affordable housing, and comprehensive approaches to community revitalization. He served as Chairman of the Banking Subcommittee on Housing, Transportation and Community Development where he fought for smart growth, jobs for the 21st Century and updates to our nation’s aging transportation system.

As a senior member of the Senate Finance Committee, he has sponsored legislation increasing access to health care, advocated for fairness in the tax code to help middle class families get college educations and be able to retire, and pushed for trade initiatives to ensure America’s global competitiveness.

A product of New Jersey's public schools and a graduate of two of the state's universities, Senator Menendez, now 68 years old, learned early the importance of standing up for what's right, no matter how powerful the opposition. He first entered public service as a 19-year-old college student when his high school would not provide books to students who could not afford them. This motivated him to launch a successful petition drive to reform the local school board and a year later won a seat on that very board. He stood up to corruption in Union City and went on to become its mayor (1986-92), a state legislator in the New Jersey Assembly from the 33rd district (1988-91), a New Jersey State Senator (1991-93) and was elected to Congress in 1992 — where he would serve for 13 years in the U.S. House of Representatives, representing New Jersey’s 13th district.

He quickly rose to leadership positions and has given New Jerseyans a seat at the table during critical negotiations on every issue since then: war and peace, jobs and the economy, education, health care, veterans issues, world affairs, transportation, and housing.

Senator Menendez’s career has been a tribute to his desire to protect the powerless from the powerful and ensure fairness for every American. He led the fight in Congress to make sure New Jersey received its fair share of recovery funds to help communities rebuild after Superstorm Sandy, chaired Senate Banking Committee hearings to hold the administration accountable for getting relief resources out of Washington and passed landmark bipartisan legislation providing relief to homeowners hit with unreasonably high flood insurance premiums.

The son of immigrants, Bob understands the importance of New Jersey’s Liberty State Park, in the shadow of Ellis Island and the Statue of Liberty, at the gateway for millions of immigrants who came to this nation seeking the American Dream and a better life for them and their children. This inspired him to become one of eight Senators who wrote and fought for comprehensive immigration reform legislation that passed the Senate in 2013 with an overwhelming bipartisan show of support.

Senator Menendez received his B.A. from St. Peter's College in Jersey City and his J.D. from Rutgers University. He currently lives in Bergen County with his wife Nadine. He’s the father of two children, Alicia and Robert Jr., and the proud grandfather of Evangelina, Ofelia, and Olivia. 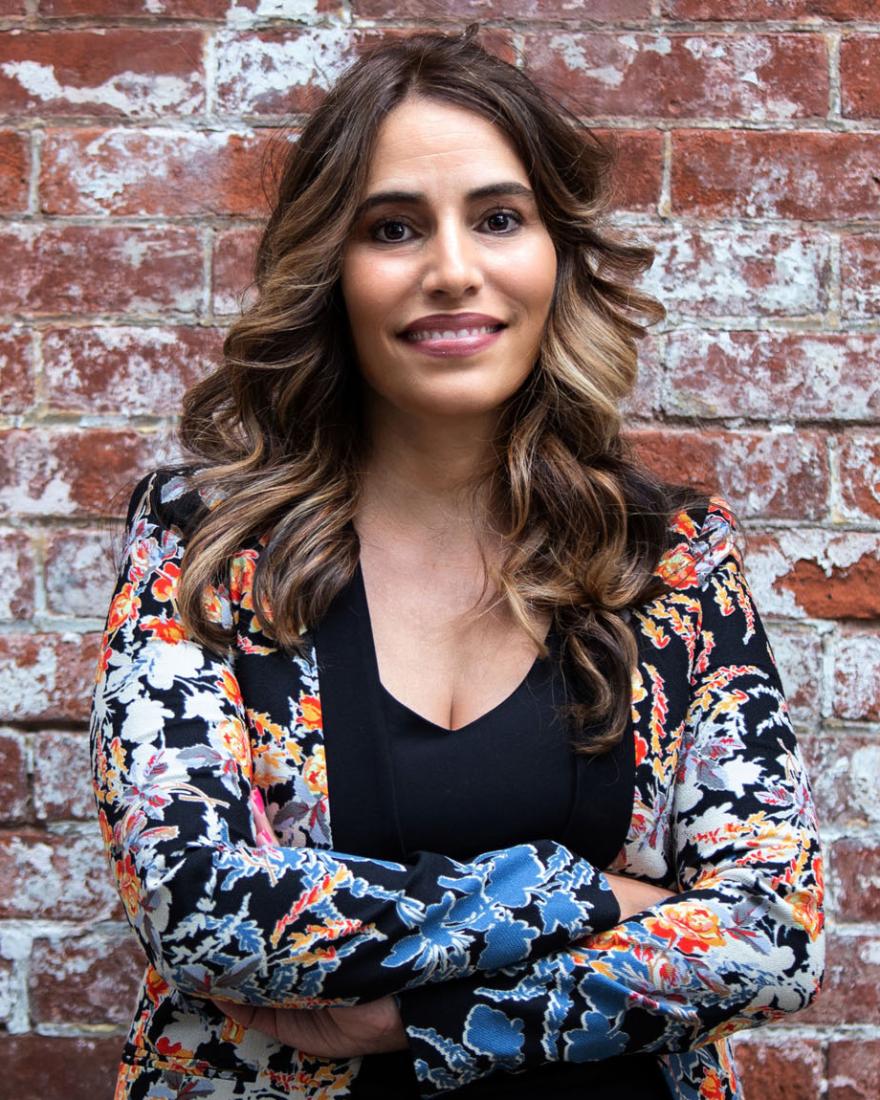 First elected in 2007, Senator M. Teresa Ruiz became the first Puerto Rican elected to the Senate. Re-elected four times— 2011, 2013, 2017 and 2021 — she is a five-term state senator representing New Jersey’s 29th Legislative District and Essex County, including most of the east side of the city of Newark, and all of Belleville, N.J.

In January 2022, Senator Ruiz was elected as the State Senate Majority Leader, and is the highest-ranking Latina legislator in state history. She was previously elected by her colleagues to serve as Senate President Pro Tempore in 2018 and 2020 and was the first Latina to hold the position.

Senator Ruiz is the past chair of the Senate Education Committee. Throughout her time in the Senate, she has fought for equity in educational spaces, acting as the leading force in expanding access to early childhood education throughout the state. She also spearheaded the law to build on the federal free and reduced meal program so that all students who qualify for the program could receive breakfast and lunch at no cost, eliminating the reduced category. Furthermore, she has sponsored laws to increase diversity within school curriculum and strengthen the Amistad Commission.

Senator Ruiz was a prime sponsor of the 2013 law making undocumented students eligible for in-state tuition rates at New Jersey public colleges and universities. She also sponsored the 2017 law requiring the Commissioner of Education to develop guidelines for school districts to ensure a supportive and nondiscriminatory environment for transgender students.

In 2016, Senator Ruiz authored a law which requires college loans granted by the state to be forgiven in the event of a student borrower’s death. She also sponsored a law to limit the suspension and expulsion of students in preschool through second grade, and another to provide stronger academic support to students with reading difficulty.

Senator Ruiz sponsored the law creating the New Jersey Advisory Council on End-of-Life Care to ensure the special needs of those approaching the end of life are met. She sponsored a 2009 law prohibiting individuals from purchasing more than one handgun a month.

The senator also authored a law that overhauled the state’s teacher tenure statute. Signed in 2012, the act put standards in place requiring tenure to be earned and maintained through ongoing performance measurements, and ensures educators get the support they need when deficiencies are identified.

Senator Ruiz was also the prime sponsor of a 2020 law to allow candidates to use campaign funds to cover childcare expenses incurred due to campaign activities.

The Senator received a bachelor’s degree from Drew University. She was a 2010 Aspen Institute Rodel Fellow, and a graduate of the Harvard Kennedy School’s Senior Executives in State and Local Government Program.

She is vice chair of the Essex County Democratic Party and is deputy chief of staff to longtime Essex County Executive Joseph N. DiVincenzo, Jr. — himself a 1976 graduate of NJCU (then Jersey City State) and a member of the NJCU Athletics Hall of Fame. She served as a delegate to the Democratic National Conventions in 2004, 2008, 2012 and 2016.

Born and raised in Newark, Senator Ruiz, 47, resides in the city with her husband Samuel Gonzalez, and five-year-old daughter, Silver Inaru.