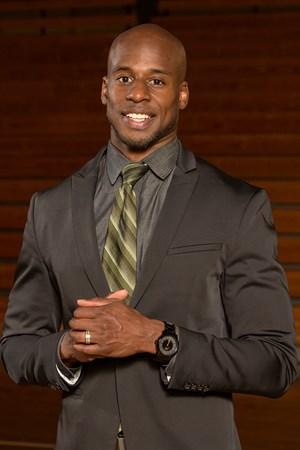 Shawn Tucker, formerly the Associate Athletic Director for Student Athlete Development at Rutgers University, was selected as the new Associate Vice President and Director of Athletics at New Jersey City University. On May 7, 2018, Tucker became just the fifth athletic director at the institution since 1934. In two years, Tucker has spearheaded the enhancements of the NJCU student-athlete experience with the addition of nine new sport programs, an apparel deal with Adidas, establishment of the Rising Knight Institute (RKI) centered on the holistic development of a student, launch of new spirt marks and brand identity, and the introduction to the inaugural NJCU Athletics Advisory Board to name a few. In March 2020, NJCU Athletics received the prestigious NCAA Division III Diversity spotlight of the Month for its tremendous efforts in the space of personal and professional development provided by the RKI.

Tucker, a former standout at wide receiver on the Rutgers football team, comes to NJCU with nearly 15 years of higher education, intercollegiate athletics, and managerial and leadership experience. In his previous role at Rutgers, he had executive oversight over the Rutgers Leadership Academy (RLA), the RLA Advisory Board, Student-Athlete Advisory Committee, Rutgers Athletics Internship Program and R Care. Tucker’s work in athletic development with the R Fund over the last two years culminated with securing the largest gift in Rutgers Athletics history—a $15 million pledge to construct the Gary and Barbara Rodkin Center for Academic Success. Working with the R Fund as Rutgers’ associate athletic director, he worked alongside Rutgers IMG to generate public and private financial support for the RLA and university capital projects while assisting in the securing of corporate sponsorships and private donations of over $1 million.

Also at Ruters, he frequently presented to executive level university officials—including the Rutgers Board of Governors—along with corporations, foundations and individual donors on the success of the Rutgers Leadership Academy. He established a Rutgers Leadership Academy Advisory Board whose nine members committed pledges of $25,000. Tucker assisted in launching R Care—a program dedicated to providing a comprehensive wrap-around care and communication system in the areas of academic support, sports medicine, sports performance and the RLA. He had staff oversight in the areas of career enrichment, leadership training, personal development and community engagement, served on the 12-member Rutgers Athletics Strategic Planning Taskforce, managed the department-wide internship program and conducted preseason meetings and end-of-season exit interviews with head coaches and their support staff for all 24 sports. Additionally, he co-chaired the Rutgers Letterwinners Association and coordinated the annual three-day leadership retreat for Rutgers’ 52-member SAAC committee. Most recently, he was the sport administrator for women’s gymnastics, providing direct oversight in all areas of the program. Tucker had oversight on the board for the Rutgers Leadership Academy that holds members representing companies such as Dun & Bradstreet, Johnson & Johnson, Napier Park and Pfizer to name a few.

Tucker came to Rutgers from Douglas High School in Parkland, Fla. He was named team captain as a senior and helped lead Rutgers to its first of four consecutive football bowl championships in 2006. A four-year letterwinner for the Scarlet Knights, Tucker was a key member of two bowl squads during his college career. As an undergraduate, Tucker served on the Student-Athlete Advisory Committee.

He graduated with a double major in geography and labor studies in May 2007 and began working for the Office of Continuing Professional Education at Rutgers as a program coordinator for their T.E.E.M. Gateway program. While there, Tucker was a member of a staff that received the 2010 Diversity Leadership Award. Tucker participated in the implementation of the YE2S Center, a partnership among Rutgers, Newark Public Schools, the City of Newark and Communities in Schools of New Jersey focusing on providing education and employment services for youth in Essex County. Tucker has also mentored youth in Newark through the Rutgers Green Rangers Mural program, which focused on the beautification and revitalization of Newark through the arts, while also serving as a key collaborator in the New Jersey High School Dropout Prevention Campaign.

In addition, Tucker serves as a minister at Abundant Life Family Worship Church (under the spiritual tutelage of Bishop George and Pastor Mary Searight) and the ministry leader of A.LIFE Ministry Inc., which thrives on creating an environment where those far and near to God can experience the love of God. Every Tuesday night nearly 200 young adults flock to Rutgers campus where A.LIFE provides an intimate worship experience, teaches the authentic gospel and creates opportunities for spiritual growth within communities.

Tucker received his master’s degree in City and Regional Planning from the Edward J. Bloustein School of Planning & Public Policy at Rutgers University.