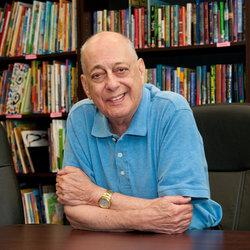 Dr. Weiss is the author and editor of countless books and articles, most recently writing with his wife, Helen. He has been an advisor and editor for many publishers and on a variety of reading series. He has also held numerous state and national professional offices including serving as president of the New Jersey Reading Association. He has also held leadership positions in the National Council of Teachers of English and the International Reading Association.

The New Jersey Reading Association also presents an annual "M. Jerry Weiss Book Award,‚ affectionately known as "The Jerry.‚ The award, established in his honor in 1993, is given to a children's, juvenile, or young adult author selected by students throughout the state of New Jersey.

The honors bestowed on Dr. Weiss only begin to recognize the accomplishments of this amazing scholar, teacher, and friend of young (and old) readers.