University President
Office of the President 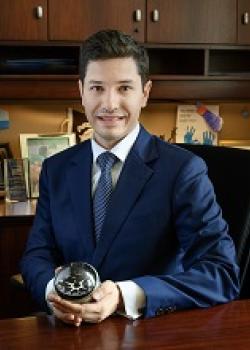 Andrés Acebo is a Hudson County native who grew up in Union City, N.J., and has maintained strong ties to the community. He is only the second Hispanic to serve as the leader of a four-year public institution in the state of New Jersey — following in the legacy of another NJCU leader, Dr. Carlos Hernandez, who led the institution as its 11th president from 1993-2012. Acebo is also the youngest known president to ever lead a public university in the State of New Jersey.

Acebo was elevated to Executive Vice President and University Counsel in the midst of the announcement of the university’s current financial emergency on June 27, 2022. He also served as Secretary to the Board of Trustees and guided its government relations initiatives.

Since the announcement of the financial emergency, Acebo has demonstrated significant executive leadership. Facing a more than $20 million deficit, he collaborated with NJCU’s organized labor, stakeholders, and constituencies to reduce the deficit by more than 50 percent within 120 days, while leading with empathy and compassion about the mission of the university and those who serve it.

Acebo has worked diligently with NJCU’s other senior leaders, external stakeholders, and entities, including the bond rating agencies which has resulted in the removal of the University from the rating agency’s negative watch. His efforts with the senior leadership of NJCU’s academic affairs division has led to developing an academic rightsizing framework that honors collective bargaining rights and creates a pathway for reallocation of resources and an updated academic portfolio.

He also has worked with the Division of Academic Affairs to affirm NJCU’s Middle States Commission on Higher Education (MSCHE) accreditation while working with Senator Menendez and our congressional delegation to identify significant future federal aid which will provide equitable access to high demand online nursing education.

Acebo, who recently completed a one-year fellowship program as part of the third annual cohort of the Hispanic Association of Colleges and Universities (HACU) Leadership Academy/La Academia de Liderazgo in Spring 2022, was one of just 25 fellows selected nationally.

He originally joined the university in February 2021 as a senior leader facilitating institutional planning, policy and program development and was responsible for facilitating effective decision-making and coordinating the execution of strategic initiatives, while providing close coordinative support to the President as an ongoing liaison for external governmental affairs issues. As Executive Vice President, he continued those critical contributions.

Office of the President Webpage