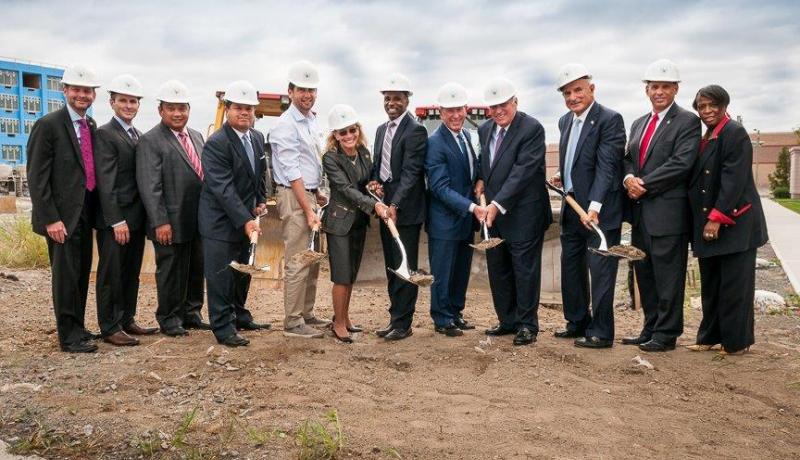 At the groundbreaking ceremony, NJCU President Sue Henderson called the University Place Redevelopment Project “a game changer” and said, “We are moving another step closer to revitalizing our city’s west side and to providing NJCU students, faculty, and neighbors with a welcoming place to live, work, dine, and shop. Think of the enormous impact these buildings and future University Place projects will have on our community.”

Dr. Henderson added, “University Place is a collaboration that was conceived more than a decade ago. It began as a vision of NJCU’s Board of Trustees, Foundation Board, and executive leadership team. Working together with forward-looking City, County, and State officials who saw the need for the revitalization of Jersey City’s west side, University Place was launched as a “P3” – Public Private Partnership – thanks to the engagement of a team of entrepreneurial developers. The buildings are constructed at no cost to the NJCU students or the University.”

The $83 million P3 (Public-Private Partnership) residential project, led by KKF University Enterprises, LLC, will build two buildings that together will have 301 market-rate apartments, more than 11,000 square feet of transformative commercial space on West Side Avenue, and parking for 303 vehicles. The first building to be constructed is the 205,400 square foot, $43 million apartment building, which will have 149 apartments and 151 parking spaces.  Occupancy for KKF University Enterprises’ first building is scheduled for fall 2018.

Dr. Henderson stated, “The West Campus Village Residence Hall was the first step in our journey to a P3-designed, state-of-the art campus and revitalized community. NJCU then contracted with Strategic Development Group to assist in the development of other commercial P3 projects and ensure sound long-term ground leases for the University.”

The first commercial building at University Place, being developed by Claremont and Hampshire, is a 205,400 square foot, $50 million apartment building.  The building will have 163 apartments and 151 parking spaces.  Occupancy for this first building is scheduled for spring 2018.

Future construction will bring additional shops, a supermarket and other retail amenities, along with ample on-street parking and garages.  Also planned are academic and non-academic facilities, including a center for the performing arts.