NJCU Graduates 1,935 on May 22 at Prudential Center 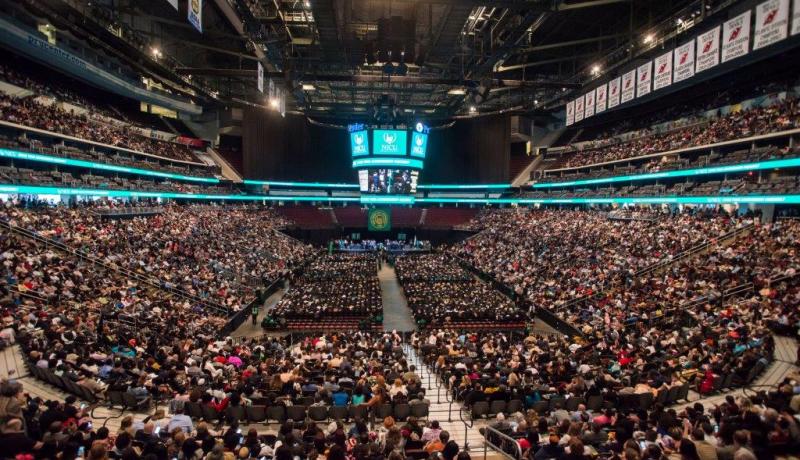 New Jersey City University (NJCU) awarded 1,935 graduate and undergraduate degrees at its commencement ceremony on Tuesday, May 22.  Degrees were conferred at a ceremony held at the Prudential Center in Newark. The ceremony can be viewed here: njcu.edu/gradlive.

The Presidential Medallion was awarded to Bob Delaney, legendary National Basketball Association (NBA) referee and NBA Cares Ambassador who built a distinguished career as one of the NBA’s highest-rated crew chiefs. [See bio sketch below.]

Upon learning that Mr. Delaney will receive the NJCU Presidential Medallion, NBA Commissioner Adam Silver commended Mr. Delaney saying, “Over the last three decades, Bob has set a standard of excellence for NBA referees.  From officiating the NBA Finals to training the next generation of NBA officials, everything he does is about leadership, service and integrity. I can’t think of anyone better to receive New Jersey City University’s highest award than someone who always inspires others by leading by example. That is what Bob has done throughout his NBA career.”

Undergraduate and graduate degree candidates in NJCU’s William J. Maxwell College of Arts and Sciences, Deborah Cannon Partridge Wolfe College of Education, College of Professional Studies, and the School of Business participated in the commencement ceremony.

Dr. Sue Henderson, NJCU president presided over the commencement ceremony.  Rafael Perez, Esq., chair of the NJCU Board of Trustees conveyed greetings from the trustees.

The Presidential Medallion was presented to Mr. Delaney by Dr. Henderson. Remarks were delivered by Mr. Delaney.

Dr. Henderson then gave the President’s Charge to the Graduates.

Throughout his life, Bob Delaney ‘85 has excelled as a team player, a teacher, a leader, a mentor, and a man of integrity.

Whether leading the Gothic Knights basketball team as a captain in his junior year at NJCU (then Jersey City State College) or dismantling organized crime organizations on a covert assignment as a New Jersey State Trooper, Mr. Delaney’s focus and determination carried him through the task at hand and brought home results.

After living deep undercover for three years, he faced the tremendous challenge of post-traumatic stress. With counseling and determination, Mr. Delaney pushed forward. He returned to NJCU to complete his bachelor’s degree in criminal justice and pursued a personal passion – officiating the sport of basketball. Eventually, NBA officials spotted his talents and offered him an opportunity to officiate in the professional ranks. In 1987, he became a full-time NBA official.

Over the next three decades, Mr. Delaney built a distinguished career as one of the National Basketball Association’s (NBA) highest-rated crew chiefs and founder of two schools that trained officials for high-integrity roles within the NBA, WNBA, and college basketball.

In 2012, Mr. Delaney transitioned to NBA Referee Operations management and later became Vice President and Director of Officials. He is also an NBA Cares Ambassador, promoting NBA-military partnership programs and interacting with veterans and active duty service members suffering with Post Traumatic Stress (PTS). He has been embedded with U.S. troops and NATO forces in Iraq, Afghanistan, Korea, Europe, Canada, and at bases and posts across the United States.

Mr. Delaney earned a Master of Arts in Leadership from St. Mary’s College of California in 2010.

His contributions to PTS awareness and support to military officials and their families have been recognized with honors and proclamations from many, including President Barack Obama and senior-ranking military leaders.

Mr. Delaney was inducted into the NJCU Athletics Hall of Fame in 2006.

During his tenure on the federal bench, Judge Linares has presided over numerous patent, securities, and class action cases, many complex civil and criminal cases, and some of the highest-profile political corruption cases in the State.

Born in Havana, he fled Cuba with his family as a boy, became a State Superior Court Judge in Essex County in 2000, and was nominated to the federal bench by President George W. Bush in 2002. Prior to his tenure on the bench, Judge Linares was a Supervising Attorney in the New York City Department of Investigation from 1978 to 1980 before moving to New Jersey to become a private practice attorney from 1980 to 2000.

A 1975 graduate of New Jersey City University, then Jersey City State College, Judge Linares went on to earn a juris doctor degree from Temple Law School in Philadelphia in 1978.

As an undergraduate at NJCU, Judge Linares was a scholar-athlete who majored in political science while earning all-conference honors as tackle on the Gothic Knights football team.

He is a past president of the New Jersey Hispanic Bar Association, an adjunct professor at Seton Hall School of Law, and a Fellow of The American Bar Association.

Judge Linares dedicates his leisure time to civic and non-profit related activities, volunteers in youth athletic programs, and mentors young men and women interested in pursuing law as a career.