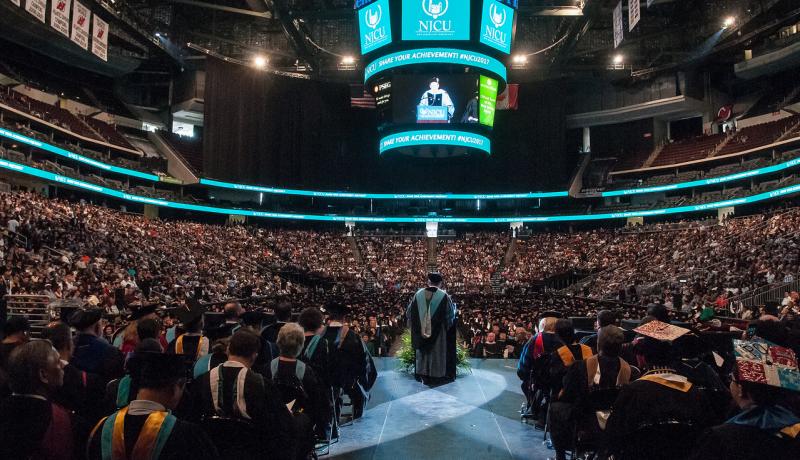 Mr. Donald M. Remy, EVP of the NCAA will be awarded an Honorary Degree; Alfred Parinello and Anita Parinello to receive the President’s Medal

New Jersey City University is pleased to announce that Donald M. Remy, Executive Vice President of Law, Policy & Governance and Chief Legal Officer of The National Collegiate Athletic Association will receive an Honorary Degree from the University at its 2019 Commencement to be held at the Prudential Center on May 16, 2019 at 9 a.m.

In addition, NJCU will award the President’s Medal to Alfred Parinello, Class 1973, and Anita Parinello Class of 1970.

As chief operating officer, Mr. Remy is second-in-command behind the president of the NCAA, assuring smooth national office and governance functions and serving as primary liaison to the Association’s highest governing body, the Board of Governors.  He maintains and establishes policies that promote Association and national office culture and vision and ensures coordination of consistent and impactful communication strategies and messaging on behalf of the NCAA and its partners.  Further, he designs and implements engagement strategies, plans and procedures for corporate partners and champions, as well as those involved in adjudicative systems, in a dynamic environment. Within the national office, Mr. Remy works with the president to set comprehensive goals for individual and unit performance and growth, evaluating performance by analyzing and interpreting data and metrics.

As chief legal officer, Mr. Remy oversees and guides effective legal, government relations and policy strategy.  He guides key litigation and contract negotiations while building and maintaining productive relationships with local and national policymakers. He is involved in crafting and advocating appropriate data-driven policy positions on various issues including academics, amateurism, athletics competition and health and safety while ensuring his reporting departments are servicing and supporting student-athletes, the NCAA and member institutions.

Mr. Remy holds a bachelor’s degree in political science from Louisiana State University, where he graduated with honors and was commissioned as a second lieutenant in the U.S. Army. He received a juris doctorate from the Howard University School of Law, where he graduated top of his class.

Mr. Parinello has had an extensive 35 year career in television and radio. Among his accomplishments, Mr. Parinello has owned and operated rock radio station WJSE that became highest rated in the State of New Jersey. In television Mr. Parinello is recognized for expanding the growth of cable television in America through the use of the first domestic satellite distribution system launched into space in the early 1980’s. He designed and successfully implemented the programming distribution plans for the Who’s Who of cable TV networks including HBO, Showtime, and ESPN.

Additionally, Mr. Parinello spearheaded the executive team that developed and successfully launched the popular cable television networks, Nickelodeon and The Movie Channel for Warner Communications. He also created, produced and co-hosted the nationally syndicated radio program, “Your Own Success” broadcast in over 125 markets nationally.

Mr. Parinello is the author of the best-selling media/marketing book, “On the Air”. Al has produced over one hundred live World-Class Concerts in Atlantic City and Las Vegas Casino’s with such talent as Kiss, Stone Temple Pilots, Lenny Kravitz, Snoop Dogg, Kid Rock, Michelle Branch, Korn, Enrique Iglesias, 3 Doors Down, Nickelback etc. and was the Creator and Producer of the award winning Broadway on the Boardwalk series at Trump Plaza Casino in Atlantic City in New Jersey and the Hard Rock Seminole Casino in Hollywood, Florida. Among Al’s current media activities includes his company JSE Computers, a national web design and search-optimization firm. In 2017 Al purchased and reopened the Surflight Theatre in Beach Haven, New Jersey.

She taught special education courses for 32 years in Cliffside Park, NJ where she earned numerous awards including Teacher of the Year.  She applied for and secured much-needed grant funding from the State of New Jersey.  These grants benefitted her school and her students.  She retired from teaching in 2004.

Mrs. Parinello participates as a volunteer on behalf of a number of local charities, and gives generously through her time and financial contributions to those in need.