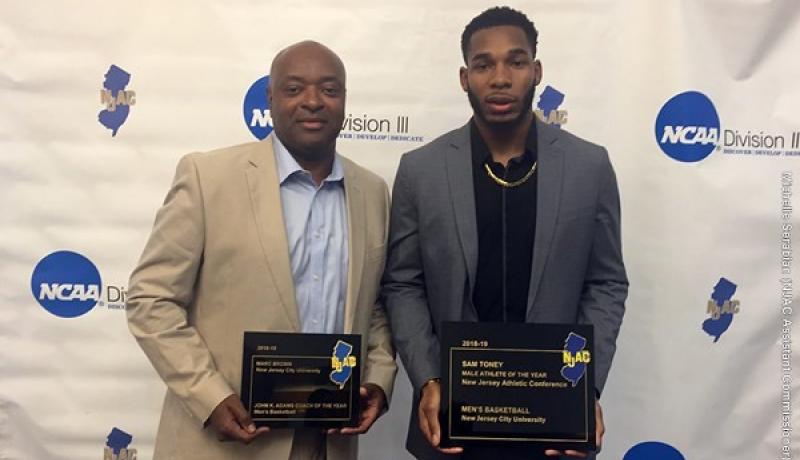 PRINCETON, N.J. (NJCUGothicKnights.com) | New Jersey City University men's basketball junior Sam Toney (Plainfield, NJ/Williamstown) has earned the most prestigious accolade possible for an athlete who participates in the New Jersey Athletic Conference by being named the 2019 NJAC Male Athlete of the Year. He is the first male athlete in the history of NJCU to win the award.

Toney's selection highlighted the 20th Annual NJAC Awards Brunch which was conducted at the Hyatt Regency in Princeton on June 9.

The honor goes to the top overall men's and women's athlete in the NJAC among all sports sponsored by the conference and all member institutions. The top men's athletes in the 10 sports the NJAC sponsors-baseball, basketball, cross country, football, soccer, swimming and diving, tennis, indoor track and field, outdoor track and field and volleyball-are annually eligible for the award which is voted on by members of the NJAC Board of Athletic Administrators. He is only the fifth men's basketball recipient of the award since 2000.

The only previous winners in NJCU history have both been women-five-time national champion and Hall-of-Famer Diana Lawson for indoor and outdoor track and field in 2004 and three-time NJAC Player of the Year Lizzelle Cintron for women's volleyball in 2007.

"I'm happy for him and proud of him," said 12th year head coach Marc Brown, the NJAC Coach of the Year. "I didn't know we had two previous winners and they were both female so this is unprecedented. He deserves it. I'm looking forward to coaching him next year. What he's accomplished so far, we can read about. I'm prouder of what he's doing academically. For Sam, after being out of high school for five years to come into this conference and do what he's doing on and off the court is pretty amazing. So I'm happy for him and proud of him. He is a great representative of the program and of the university. He's the epitome of a student-athlete.

Toney had another magical year in 2018-19. He was voted First-Team NABC All-American in voting by the National Association of Basketball Coaches (NABC), becoming just the third Gothic Knight in school history to be named an NABC First-Team All-American.

"This is a blessing and I'm very thankful for that!" said Toney of the unprecedented honor. "Being a college athlete has meant so much to me over these past three years. I would've never imagined being here and being this successful. My will to want to be better and do better drives me. I'm thankful for my coach for allowing me to be a part of this program and I know I'm not the easiest person to coach. All of these awards and accolades mean a lot to me but, without the support system I have received over these years, this would not be possible-from my coaching staff all the way down to my stepparents, my dad, my brothers, my teammates, and the support from the other teams and the staff members from our school! I'm honored and blessed to receive this award."

Toney, the only NJCU player to ever win the NJAC Player of the Year award twice, is just the fifth two-time winner or repeat winner in the conference dating back to 1980.

In May, he became the first-ever winner of NJCU's Most Outstanding Male Athlete of the Year.

Toney lived up to the preseason expectations when he was named as a Preseason First-Team-American by three different publications, D3hoops.com, Street and Smith Magazine and Basketball Times.

Behind his effort, NJCU went 20-8 and won its 14th NJAC regular season championship in school history-an all-time conference record. The Knights qualified for their third consecutive NCAA Division III Tournament as an at-large selection and won 20 games in a season for the third time in four seasons and the 17th time in the illustrious 86-year history of the program. The Gothic Knights are 60-24 in Toney's three seasons and have appeared in two NJAC championship games.

NJCU was ranked as high as No. 16 nationally during the season by D3hoops and was 10th nationally in the Street and Smith and Basketball Times preseason rankings. NJCU was also ranked No. 1 in the NCAA Division III Atlantic Region in the first two regional rankings released in February.

Toney finished his junior season with 1,362 points-11th in school history-and currently has the most points by a three-year player ever at NJCU. His 176 career three-pointers made is tied for second in school history and within striking distance of Dana John's program record of 209.

Moving from power forward to small forward this season, Toney, a 6-foot-4, 220-pounder, saw his statistics decline from his sophomore season, but that positional move spread the floor to make his entire team a scoring threat. He still scored 20 or more in 11 games with a high of 31 and generated five double-doubles, including the NCAA Tournament and NJAC Semifinals.

"The good thing is I have him for one more year," said Brown. "I'm really looking forward to seeing what he accomplishes next year as a senior, both on and off the court. He's right at that 3.0 [GPA] range and one of his goals next year is to be both an athletic and academic All-American. He has his sights on that and he can achieve both, as long as he stays consistent and keeps working."

NEW JERSEY ATHLETIC CONFERENCE MALE ATHLETES OF THE YEAR (since 2000)