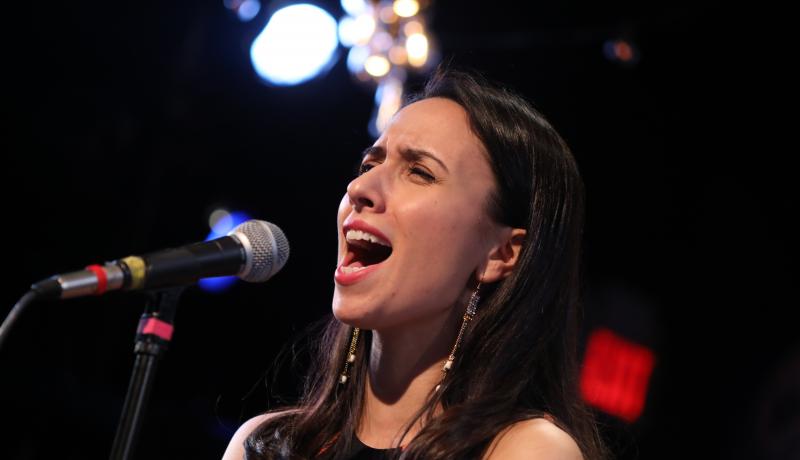 NJCU alumna Vanessa Perea didn't start out to become a jazz singer. "I took private voice lessons in high school and eighth grade -- all classical music with a touch of theater," she says. After graduating from Colonia High School in Woodbridge, she attended New Jersey City University, earning a BA in Music Education. While there, she studied under Grammy-nominated jazz vocalist Roseanna Vitro. "Roseanna would make the students listen to mixed CDs," she recalls, "and I heard Ella Fitzgerald sing 'How High the Moon'. I thought it was insane! How could someone do this with their voice? After that, I heard Anita O'Day's version of 'Tenderly'. Her voice was so sultry and full of character."

After graduating from NJCU in 2010, Perea decided to pursue a career as a jazz vocalist. In a review of Soulful Days, her 2014 album, Jazz Times's Christopher Loudon wrote that her singing recalled "the interpretive fearlessness of Anita O'Day" and "a slithery sexiness worthy of Sarah Vaughan." Jazz Weekly's George W. Harris described her singing as having "a crisp and clear Nancy Wilson-ish sound . . .flexible enough to handle tricky bebopping lines," but with "the addition of Latin passion to put some feeling into the lyrics as well . . . "

According to Vitro, Perea "was a star student of mine. She learned jazz phrasing and started swinging by two semesters of study. She was transcribing solos by the time she sang with the late, great James Moody in concert at NJCU." Earlier this year, Perea appeared at the Mezzrow Jazz Club in Greenwich Village and Birdland Theater and is a regular attraction in New Brunswick as part of the New Brunswick Jazz Project's ongoing series.

In addition to her solo career, she is a member of The Ladybugs, a sextet that includes two lead singers, doubling on percussion and ukulele; two trombone players; a guitarist; and a bassist. The group's repertoire leans heavily on songs from the 1920s, '30s, and '40s. The Wall Street Journal's Will Friedwald defined The Ladybugs as part of "the emerging genre generally known as the new hot jazz . . ." and The New York City Jazz Record reported that the group's "refreshing sound and smart interpretations of early jazz tunes come as something of a revelation."

In 2018, The Ladybugs spent three weeks at Jazz At Lincoln Center's club in Shanghai, China, appearing there with other rising American jazz stars such as saxophonist Patrick Bartley, Jr., and drummer Evan Sherman. Shanghai, Perea says "felt like five New York Cities all together. The music scene was pretty cool, but the audiences were more subdued than audiences in New York."

On Sunday, November 17, Perea will be leading a trio at the New Jersey Jazz Society's monthly Jazz Social at Shanghai Jazz. Doors open at 2:30 p.m.; the music starts at 3 p.m.  There is a $10 food/beverage minimum. Admission is free for NJJS members; $10 for non-members. Shanghai Jazz is located at 24 Main St. in Madison.

Funding for the New Jersey Jazz Society Socials is made possible in part by Morris Arts through the N.J. State Council on the Arts/Department of State, a partner agency of the National Endowment for the Arts.