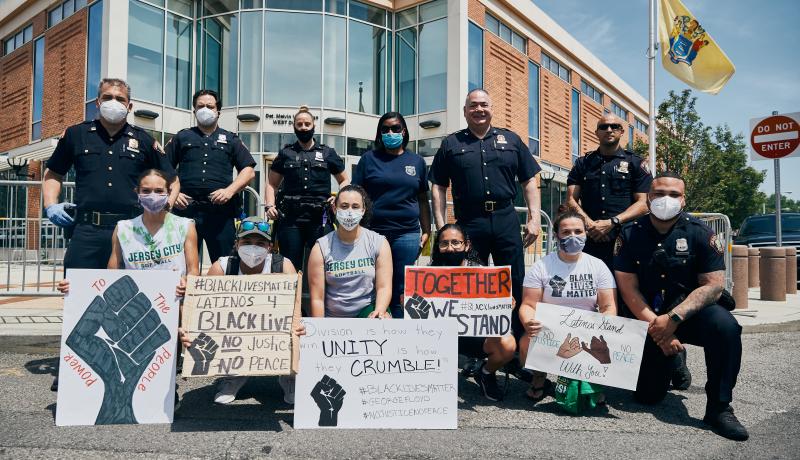 INDIANAPOLIS, Ind. (NJCUGothicKnights.com) | For the second time in five months, the New Jersey City University athletics department has been honored by the National Collegiate Athletic Association for its work in embracing diversity and inclusion across the intercollegiate athletics community. NJCU was selected as the July 2020 recipient of the NCAA Division III Diversity Spotlight Initiative.

The honor was bestowed on NJCU in recognition of its positive social activism in the wake of the death of George Floyd in Minneapolis this spring. Most notably, on June 6, NJCU Athletics, in conjunction with the NJCU Community, gathered in solidarity to collectively grieve and reflect, while offering encouragement and healing to the local community. All who gathered also participated in a march to share their voices. The event culminated in a community cleanup of a two-mile stretch of Martin Luther King Drive in Jersey City.

Shawn Tucker, Associate Vice President and Director of Athletics, opened the solidarity event with profound remarks that were captured in this video. Photos from the event can also be viewed in this gallery.

NJCU was again selected for the award by a committee composed of Division III commissioners and will receive $500 towards a future diversity initiative.

“I applaud the athletics department’s event that gathered the NJCU community, including student-athletes, to collectively grieve and reflect on the recent racial injustices,” said Dan Dutcher, Vice President for Division III, in a letter to the university. “I congratulate you on your efforts and know that this social activism will positively impact your student-athletes, coaches, staff and administrators and local community.”

NJCU President Dr. Sue Henderson, the former chair of the NCAA Division III President's Council, echoed the NCAA’s words, saying: “I want to congratulate Shawn Tucker and the athletics department for their steadfast leadership and the positive, thoughtful and impactful manner in which they continue to make a difference in our community. Thank you to the NCAA for again recognizing the important, holistic work we are doing here at NJCU as we continue to strive for national excellence. During these challenging times, our work in developing students is a reminder that together, there is no challenge we cannot overcome.”

Tucker added: “On behalf of President Henderson and New Jersey City University, we are honored and greatly appreciate the acknowledgement from the NCAA on our collective efforts to positively impact our community during this unsettling time in our nation. I want to thank the NCAA for all of its efforts on behalf of Division III and our Gothic Knight student-athletes.”

NJCU was previously honored as the March 2020 recipient of the NCAA Division III Diversity Spotlight Initiative for its work with its Rising Knight Institute, Student Athlete Advisory Committee and community outreach initiatives.