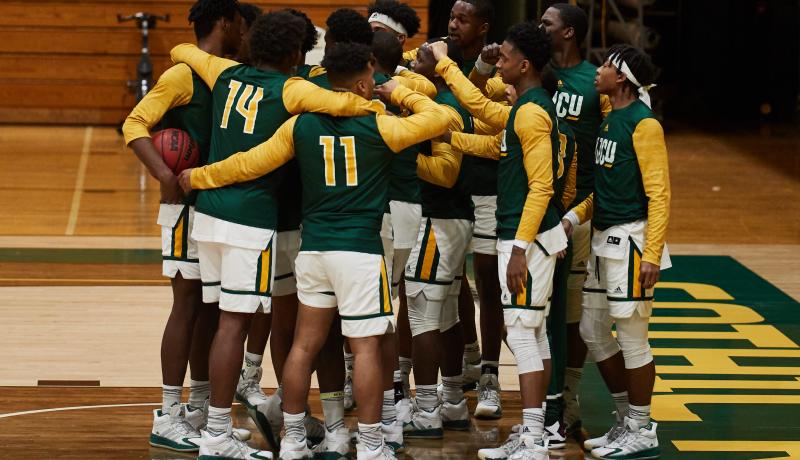 NJCU, the No. 2 seed in the eight-team tournament, owns a 6-1 overall record and has won four consecutive games. Stockton, the No 5 seed, is 5-3 overall.

Please note that today’s previously scheduled NJAC women’s basketball championship game between No. 3 seeded NJCU and No. 1 seeded Montclair State, has been postponed until Saturday, April 3 at 3 p.m.

Live stats are also available for the game: https://njcugothicknights.com/sidearmstats/mbball/summary.

Due to COVID-19 protocols, only the family of NJCU’s men’s basketball players with a ticket are permitted to attend the game. All others without a ticket are advised to watch the game broadcast.

NJCU has won 12 conference championships — the most in league history — and is seeking its first championship since the 2011 season. Stockton is seeking its 10th NJAC title; it has won nine league crowns — most recently in 2016 when the Ospreys won the third of three consecutive titles.

It will be the 91st ever meeting between NJCU and Stockton; the Gothic Knights are 52-38 in the previous 90 matchups. The schools met twice this season in the regular season. Stockton won the first meeting on February 12 in Galloway, N.J., 85-73 — NJCU’s only loss of the season. The Gothic Knights won the dramatic rematch on February 13 in Jersey City when senior guard Denzel Banks hit a fall-away jumper at the buzzer to win the game, 67-65. That buzzer-beater was featured on multiple television networks, including WCBS in New York City.

It will be the seventh meeting ever between NJCU and Stockton in the NJAC Tournament and each team has won three times. The last time NJCU and Stockton met in the league tournament was the 2017 NJAC Quarterfinals in Jersey City; NJCU won, 97-87. NJCU is 2-1 in home conference playoff games against Stockton.

The game marks only the second time NJCU and Stockton have squared off for a conference championship. On February 24, 1979, then-Jersey City State College defeated then-Stockton State College, 89-68, in Pomona, N.J.

NJCU is led by 14th year head coach Marc Brown, who owns a 216-145 record. The three-time NJAC Coach of the Year, he is the second winningest coach in program history, behind only his father, Charlie Brown `65 (M.A. `85) (483 wins, 1982-2007). Together they are the winningest father-son combo at one school in NCAA Division III history. The younger Brown has guided NJCU to one NJAC championship and four appearances in the NCAA Tournament.

With only four players returning from last season, the 2020-21 Gothic Knights are very young. One transfer, sophomore guard Derryen Whyte leads the team in scoring at 11.7 points per game. Senior guard Denzel Banks, a two-time All-NJAC selection, is second in scoring at 10.6 per game while true freshman forward Ryan Savoy, who earlier this year was named NJAC Player and Rookie of the Week in the same week, is third in scoring (10.3 per game) and leads the Knights in rebounding (6.7). Five other players average 6.0 points or more. Sophomore center Michael Clement is among the national leaders in blocked shots (1.85 per game). As a team, NJCU leads the conference in points per game (79.6), rebounds per game (43.6), rebounding margin (9.0), offensive rebounding (15.14), field goal percentage defense (.366) and blocked shots (5.1) and with 26.6 points per game off of turnovers has been an exciting squad to watch running the floor.

HOW NJCU GOT HERE:

The Gothic Knights hosted #8 Rutgers-Camden in the NJAC Quarterfinals on March 5, winning easily, 85-48. The semifinal round, scheduled to be at home against #3 Montclair State University on March 12, was canceled due to COVID-19 protocol, with NJCU advancing.

HOW STOCKTON GOT HERE:

The fifth-seeded Ospreys needed to win two road games to reach the NJAC finals. Stockton upset Rutgers-Newark in the Quarterfinals on March 5 (67-45) before shocking top-seeded and undefeated The College of New Jersey on March 12 in the semifinals, 65-58.