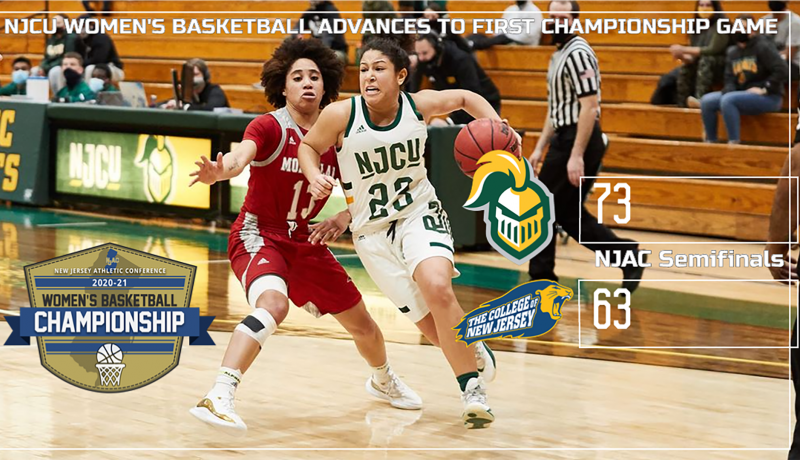 EWING, N.J. | Just three years removed from a season where the New Jersey City University women’s basketball team went 0-21, the Gothic Knights will play for the New Jersey Athletic Conference championship. In a remarkable transformation under third-year head coach Patrick Devaney, Sr. `12, NJCU went on the road and upset No. 2 seeded and previously undefeated The College of New Jersey, 73-63, on March 12 in the NJAC Semifinals, to advance to the NJAC Championship game for the first time in the 51-year history of the program.

The Gothic Knights — the No. 3 seed in the eight-team tournament improved to 8-2 overall — and will face the only team it has lost to this season, top-seeded Montclair State University, in the conference championship game on Saturday, April 3 at 3 p.m. at the Panzer Athletic Center in Montclair, N.J. MSU (8-1, 6-0 NJAC) survived fifth-seeded Kean University, 56-52, in the league’s other semifinal.

Visiting fans will not be permitted to attend the game due to COVID-19 restrictions. To follow the NJAC Championship game: Broadcast/Red Hawk Sports Network | Live Stats

“It feels surreal, but this is something I really imagined was possible,” said Devaney. “I felt we had so much talent around us in Jersey City and in Hudson, Essex and Union Counties. I figured if we could get our local kids to come, we could really start making things happen here. Getting the right kids is what has made this happen. It’s an amazing feeling to be in this spot [a championship game] in just three years.”

NJCU is 3-2 all-time in the NJAC Tournament, 3-1 under Devaney and 2-0 this year. Prior to Devaney’s hiring in June 2018, NJCU had not qualified for a conference playoff game since 1988-89 and had never won (0-1). Fast forward 31 years, and NJCU reached the NJAC Tournament last year in just his second season at the helm — then upset Kean in the Quarterfinals — before losing to Montclair in the semifinal round.

Now the two schools will meet again, and it sets up one of the greatest David and Goliath matchups in any sport in the history of the New Jersey Athletic Conference. In 2017-18, the NJCU women’s basketball team lost every game it played (0-21) and had not won a conference game in three years. Meanwhile, Montclair State won its sixth consecutive NJAC championship that year and reached the NCAA Sweet 16. The Red Hawks have been the league’s barometer for more than a decade.

Meanwhile, NJCU has never won a game on the road against Montclair State (0-34) and the Red Hawks have won the last 35 meetings at any site between the schools, dating back to 2002, including both meetings this year. But while Montclair did defeat NJCU twice this season — each time by the same score (67-58) on February 26-27— the Gothic Knights led in both games, giving NJCU hopes it could achieve history on March 19.

TCNJ, which finished the COVID-abbreviated season with a 9-1 record (8-0 NJAC), led 24-17 after the first quarter and grasped a slim 33-32 margin at the half after NJCU outscored the Lions 33-32 in the second quarter.

NJCU would outscore the Lions in each of the final three quarters of the game at Packer Hall — a 21-16 differential in the third to seize a 53-49 — and 20-14 in the fourth quarter to secure the 10-point victory. The two teams traded the lead twice early in the third before the Gothic Knights exploded for a 12-1 run en route to an eight-point, 46-38, lead with 4:50 left in the quarter.

TCNJ hit a three with 3:36 left to make it a five-point game, but the Gothic Knights scored the next five to gain a 10-point lead (51-41) following a three-point play from Anderson and a pair of free throws for Rodriguez. The Lions were able to trim the gap back to four points by the end of the quarter and the Knights took a 53-49 lead into the fourth.

TCNJ used an 8-0 run to start the fourth quarter and reclaimed a 57-53 lead with 7:38 remaining.  But NJCU demonstrated the resiliency and grit that Coach Devaney says has been the hallmark of his squad, as the Knights responded with a 9-0 run over a span of 4:07 to punch its ticket to the final. A pull-up jumper by Rodriguez and a layup from Edmond started it off with a pair of two-point buckets to tie it and Holmes drilled a crucial three-point shot with 5:46 to go to take the lead for good. A jumper by Anderson made the lead five (62-57) with 3:50 remaining. The Lions trimmed it back to a one-point game (62-61) with 2:55 remaining before Rodriguez hit a dagger three-point shot with 2:34 to go. Anderson hit a jumper in the lane to make it 67-63 after TCNJ had drawn within two points, and Rodriguez buried a back-breaking jumper with 39 seconds left to push the advantage to six (69-63) before she sealed it from the foul line with four free throws.

“It’s a great time to be a Gothic Knight,” said Devaney. “The championship — it’s only one game. We played them twice and we are familiar with them. Our freshmen should feel like they’re no longer freshmen. We will face a Karin Harvey [head coach of Montclair State] team that is balanced and deep. While that will be a very tall task, I believe our girls will be up for the challenge and will be really prepared. We’re looking forward to playing for a championship for the first time. ”

We Are Jersey City’s Team.