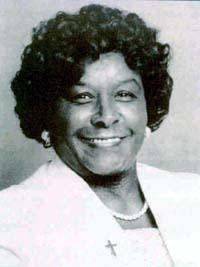 She taught at many prestigious universities, including Queens College of the City University of New York, where she was the institution's first African-American faculty member, New York University, Fordham University, Columbia University, Tuskegee Institute, and the University of Michigan.

Dr. Wolfe's trailblazing achievements went far beyond academia. She was one of three women civilian pilots to join the Tuskegee Airmen, a segregated unit of Black fighter pilots that made historic contributions to the American effort in World War II.

While serving as Chief of Education for the U.S. House of Representatives' Committee on Education and Labor, Dr. Wolfe—the first African American to hold the position—helped shape legislation that originated Head Start, financial aid, and community colleges, and modernized vocational education, thereby making equity and access possible for all.

Dr. Wolfe was the first person to serve concurrently on New Jersey's State Boards of Education and Higher Education. In 1970, the Reverend Dr. Wolfe became the first African-American woman minister to be ordained by the Baptist Church. She was an avid participant for years in Non-Governmental Organizations at the United Nations, and was the longest-serving president of Zeta Phi Beta Sorority.

Dr. Wolfe, teacher, preacher, humanitarian, died on September 3, 2004. The Deborah Cannon Partridge Wolfe College of Education was dedicated in her honor on April 17, 2007.