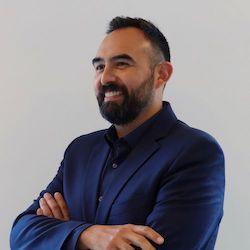 Adrián Franco is a performance-driven and entrepreneurial executive with more than 15 years of experience providing strategic and operational leadership on education and economic development initiatives. In February 2021, NJCU named Franco as the inaugural executive director of the Guarini Institute and manager of a $5 million gift to the university to launch the institute. Prior to his current role, Franco was an officer and director at the Federal Reserve Bank of New York where he supervised a portfolio of education and community development programs and oversaw advisory boards for the bank’s president. Franco engaged business schools to address culture reform in the financial sector, implemented programs to foster the institution’s diversity goals and led interventions to attract capital to low-income areas and regions affected by natural disasters. He also authored resources to underscore the importance of community engagement for socially responsible investments.

Franco was the inaugural executive director of Qualitas of Life Foundation, a nonprofit organization advancing financial inclusion that has served over 60,000 immigrants. In Mexico, where he was born, he was a member of President Elect Vicente Fox’s transition team and held senior roles in the public sector. Franco has been a member of the executive board of TruFund Financial Services since 2019 and the advisory boards of higher education institutions in New York and New Jersey. He is a frequent speaker at leading national and regional conferences and has published in multiple media outlets in the US and Mexico. Franco graduated from Boston University with a Bachelor of Science in Business Administration and holds a Master of International Affairs and a Ph.D. from Columbia University.

Dr. Xiaomin Guo is an associate professor of finance and a Certified Financial PlannerTM.  She was a faculty member and the manager of the Merrill Lynch Wealth Management Center at the University of South Florida and Pacific University Oregon. She leads and teaches investments, financial modeling, and financial planning for graduate and undergraduate programs. She is an established scholar with numerous publications in the investments and real estate fields.

Emily has worked for the NJCU School of Business for nearly 3 years as an administrative assistant and is dedicated to her role within the Frank J. Guarini Institute for International Education and Economic Mobility. Having earned a B.A. in English at Saint Peter’s University, and an M.S. in Publishing from Pace University, she is now pursuing an MBA in Marketing with NJCU to strengthen her skill set in marketing and social media coordination, beginning with her work for the Guarini Institute. Her professional background includes internships with literary agencies, non-profit organizations, and as a project assistant to CollegeBoard.