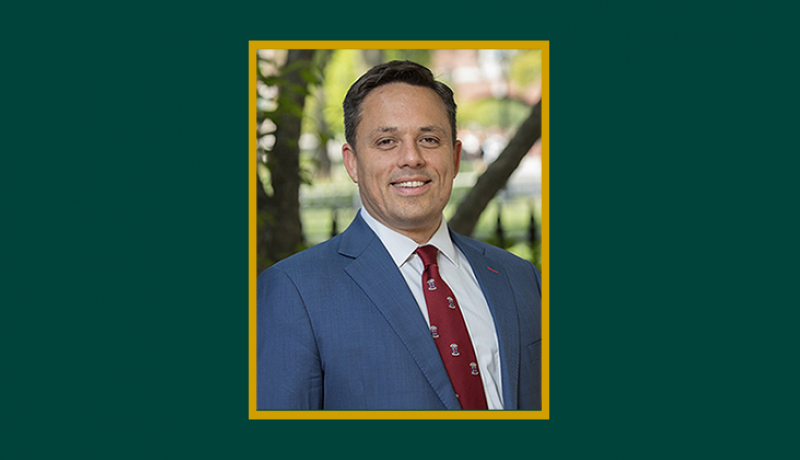 JERSEY CITY, N.J. | New Jersey City University (NJCU) has announced the appointment of Carlos Lejnieks, the President and CEO of Big Brothers Big Sisters of Essex, Hudson & Union Counties, to the university’s Board of Trustees. Lejnieks will serve on the Finance & Audit Committee and Mission Committee.

Lejnieks became CEO of the Newark-based organization in 2008 and within four years, saw it flourish — expanding its service from approximately 100 youth to over 1,100 annually. Under his leadership, BBBS has received numerous awards from local, state and national entities, including a formal recognition by President Obama. In 2016, he was asked to ring the Closing Bell at the Nasdaq in celebration of National Mentoring Month. Lejnieks is the immediate-past Chairman of Big Brothers Big Sisters of New Jersey.

NJCU President Sue Henderson said, “We are thankful Carlos has joined our Board. His proven leadership in guiding a vital local non-profit organization in Big Brothers Big Sisters has prepared him for this key policy and management role at our institution. We look forward to his insights and guidance as we prepare to advance our strategic plans.”

Lejnieks said: "I am extremely honored to be appointed to the Board of such a critical anchor institution in our community that serves many of the students and families that we serve at Big Brothers Big Sisters. As the son of an Ecuadorian immigrant, it is doubly an honor to join NJCU, one of this region's top Hispanic-serving institutions of higher education."

Prior to joining BBBS 13 years ago, he was an administrator at North Star Academy in Newark. Previously, Lejnieks held positions as Vice President at CN Communications International and at Goldman Sachs.

In 2014, Lejnieks was given the inaugural Presidential Medallion from NJCU where he also delivered the institution’s commencement address.

Lejnieks has an impressive history of board and trustee service to multiple organizations and commissions. Presently, he also serves on the Brown University Alumni Association Board, the Board of Regents for Saint Peter’s University and is a Trustee for Jersey City Medical Center/RWJ Barnabas Health) and St. Benedict’s Prep. He has served as a Commissioner for the New Jersey Department of Banking & Insurance Real Estate Commission since 2018.

He is immediate-past Chairman of the NJ Charter Schools Association and is also co-founder and Vice Chair of Democracy Prep Public Schools — a high performing network of schools serving over 5,000 youth based in Harlem, N.Y. In 2006, he received Democracy Prep’s “Change the World” award for helping create the school.

An Aspen Fellow, he was selected as one of 12 people in the world in Aspen's “Emerging Leaders” cohort in 2012 and, in 2011, he graduated from the American Express Leadership Academy. In 2014, he received the NJ Community Leadership Award from ASPIRA and, in 2013, he was honored with the "Education Leadership Award” from the National Organization of African American Administrators, the national “40 under 40” award by the New Leaders Council, and the All Stars Project (Newark) “Community Spirit Award”. In 2016, he was recognized in the New York Yankees “Civic Leader Spotlight”.

In 2011, Lejnieks was a featured speaker at the Newark Peace Summit headlined by the Dalai Lama. He has guest lectured at Brown University, Columbia Law School, NYU, Rutgers University and Seton Hall Law School on such themes as education, corporate social responsibility, diversity, social entrepreneurialism. He has emceed many events including Autism NJ's 50th Anniversary Gala and the American Express Leadership Academy Inaugural Alumni Summit. He was an Executive in Residence at Saint Peter’s University and served on the News Corporation Diversity Council from 2009-14.

A former Division I collegiate varsity wrestler, Lejnieks has a B.A. degree in International Relations and Commerce from Brown University and a M.Sc. degree from the London School of Economics. In 2011, he was given an Honorary Doctorate from Saint Peter's University, where he delivered its commencement address. In December 2016, he delivered the graduate degree commencement speech for the London School of Economics.

About NJCU
New Jersey City University is an institution of higher learning with an audacious goal: the development of our students, our city, our communities, our state, and the world beyond. We are a game-changing force for our students and their families. Whether our students are enrolled in one of our 50 undergraduate, 28 graduate or three doctoral programs, NJCU provides an affordable, diverse environment, and an exceptionally supportive faculty—all of which prepares them to be critical thinkers in a global landscape.

Tagged as:
Board of TrusteesNewsPresidential Announcements