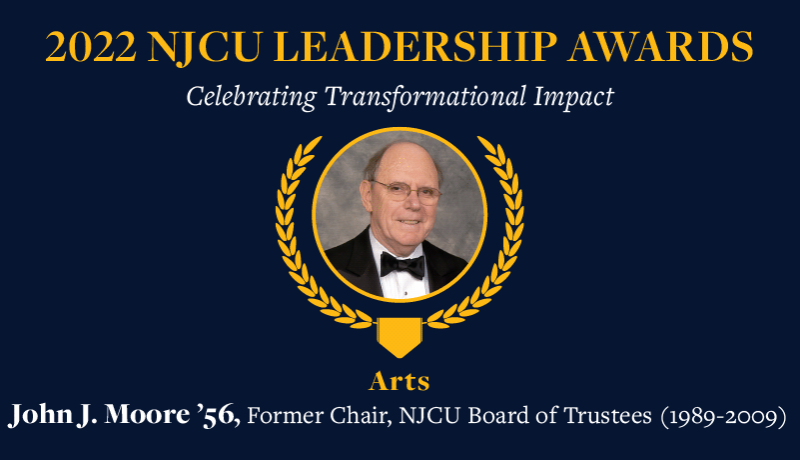 JERSEY CITY, N.J. | New Jersey City University (NJCU) has announced that John J. Moore, L.L.M., '56, the former Chair of the Board of Trustees, longtime Trustee Emeritus and NJCU Athletics Hall of Famer, will be recognized posthumously as an honoree during the 2022 NJCU Leadership Awards — the institution’s annual celebration of those who have made a lasting impact on society in the Jersey City and the greater Hudson County area. Mr. Moore is the third individual announced to be celebrated as part of the four-honoree gala and will be acknowledged in the Legacy category.

Presented by the NJCU Foundation, this year’s theme will be Celebrating Transformational Impact, and the university will honor four individuals in the categories of Service, Arts, Innovation, and Legacy.

Assembly Deputy Majority Leader and New Jersey Assemblywoman Angela V. McKnight was the first honoree announced and will be recognized in the Service category. Developer Paul Silverman, whose approach to building neighborhoods through Jersey City-based real estate company, SILVERMAN, and who has been a steadfast supporter of the arts as a volunteer and philanthropist, is the second recipient in the Arts category.

The final honoree, in the Innovation category, will be announced the week of April 25. For more information on the 2022 NJCU Leadership Awards and to purchase tickets, visit, njcu.edu/gala.

The third honoree this year is the late John J. Moore, in the Legacy category. Legacy: perhaps no single individual in the history of the institution has left a more revered legacy than Mr. Moore.

At the time of his passing in January, Dr. Sue Henderson, President of NJCU, said “John Moore is one of the most distinguished alumni and influential leaders in the history of this university. His deep love for his alma mater was evident in his words and his actions and his vision and foresight for what NJCU could and should be will have a long-lasting imprint. John lived the university’s mission through and through. While he will be missed, John has impacted generations of Gothic Knights through his work and earned the respect and admiration of many.”

A teacher, lawyer, and prominent educational advocate, Moore, 88, was appointed to the Board of Trustees of then-Jersey City State College in 1982, was named the Chairman of the Board in 1989, and served for a total of two decades in the pivotal leadership role — longer than any other person in its history — and 27 total years on the Board of Trustees, before stepping down in 2009.

His son, John Moore, Jr., described his father as a lifelong teacher — a leadership characteristic that was the greatest accomplishment of his career.

“John was a lifelong teacher. He studied teaching at Jersey City State College, but had learned to teach long before, as the oldest of seven children he helped raise. He loved the spirit of learning and mentoring. He taught in the public schools of Hudson Country, trained young lawyers at Barry, McTiernan and Moore, taught his children at home, and mentored colleagues and friends on the Board of NJCU and the State Board of Higher Education that he served on during the last decades of his long career. Throughout his life, he served as a tutor and confidante, always inspired by the achievements of others and the great works for school and community that they achieved together.”

Throughout his career and his life, Mr. Moore was inspired to lead as a volunteer and philanthropist, in support of organizations that better our society.

“John’s philanthropic focus was of course NJCU,” noted Moore, Jr. “But he viewed philanthropy as more than just financial support, as important as that is. He believed in sustained commitment — by getting involved, and through organizing committees and initiatives. He believed in removing barriers, whether bureaucratic, political or simply custom. He believed in action and results, but also in the joy of association. Boards were important drivers, but the bonds of taking in a basketball game, or congratulating an athlete at an awards dinner was just as important and provided the fuel for his inspiration to get involved and stay involved for his whole life.”

During his tenure, John oversaw the expansion and formal transition of the college to New Jersey City University in 1998. He also served as a founding member of the New Jersey Governing Board of State Colleges from 1985-1990 — the precursor of the New Jersey Association of State Colleges and Universities (NJASCU) — the Board's inaugural Chairman in 1985, and a member of the Board of Higher of Education for the State of New Jersey from 1985-1987, where he worked to secure childcare funding on behalf of single mothers returning to school.

At the time of Mr. Moore’s passing, Dr. Carlos Hernandez, NJCU’s 11th President from 1993-2012, remembered his friend and colleague, saying “John has a unique place in the university's history and in New Jersey higher education in general. His commitment and love for the students we serve, for public higher education and his steadfast loyalty were the hallmarks of his incredibly wonderful and beneficial leadership of the Board of Trustees of the University. John was always there to support the institution and my vision for its future, and he always had the respect of his fellow board members because of his internal drive to do what was best for the University.”

On November 11 1989, Mr. Moore was inducted into the Jersey City State College Athletic Hall of Fame, now known as the Lawrence R. Schiner Athletics Hall of Fame, for his collegiate basketball career at the institution and for his later work as a leading contributor. He was instrumental in promoting support for the renovation of the Tidelands Athletic complex — now known as the Thomas M. Gerrity Athletic Complex — and other athletic projects. He was the board’s leading supporter of increased resources and improved facilities for the athletic program and a strong advocate of the importance of athletics in the life of the college.

“John defined leadership by example and through giving back,” said Moore, Jr. “Being a leader began with remembering opportunities afforded him, making good use of them throughout his life, and then paving the way for others to pursue their goals.”

On December 7, 2004, upon the recommendation of the University Senate, Moore received the ultimate honor when the university board voted to rename the Athletic and Fitness Center in his honor, officially dedicating the John J. Moore Athletics and Fitness Center on March 22, 2005. Commonly known as ‘The JMAC’, the facility, which opened in 1994, is the focal point for the NJCU athletic department and home court to Moore’s beloved Gothic Knights, including the basketball, volleyball and now wrestling programs. Moore was also a long-time member of the Green and Gold Club, NJCU’s previous athletics booster organization.

Born on January 24, 1933 in West New York, N.J., Moore was the oldest of seven children. Known throughout his life for an extraordinary work ethic, John joined the workforce at age seven. He later attended Memorial High School in West New York, and continued to support his family, at various points leaving school to work double shifts at the embroidery factories.

He applied to then-Jersey City State Teachers College and was accepted on a scholarship, an experience that would change his life forever and light the torch for an eight-decade love for the institution. A standout men’s basketball point guard from 1952-56 under Coach Dr. John Reckzeh, he was one of its earliest stars and led the program as a two-year captain, before graduating in 1956 with a Bachelor of Arts in Education.

He joined the New York firm of Barry, McTiernan and Moore as a senior partner in 1971. Along with his longtime partner and close friend Roger McTiernan, he oversaw a two-decade expansion of the firm. He served as a member of the Defense Association of New York, Editor of the Defendant, a Vice President of the Defense Research Institute, and the President of the Catholic Insurance Guild.  He retired as partner from Barry, McTiernan and Moore in 1985, but remained affiliated with the firm for years after.

Civically in his long-time hometown of Teaneck, Moore was appointed the first chairman of the Civilian Complaint Review Board in 1990 — the first of its kind in the state.

Moore was quoted in his later years as saying "I find myself to have been blessed with good fortune in my career, and more significantly, with my family. I thank them for being what they are and for being a part of my life...I am grateful for what has happened, what I have, and who I am."

Moore is survived by his wife of nearly 65 years and high school sweetheart Carmela, daughter Christine, son John and his wife Laura, and grandchildren Anthony and Giovanna.

According to his son, the advice his father would give to the next generation of leaders truly embraced the mindset of paying it forward.

“John would say work hard, commit yourself with full energy, speak honestly and directly, act selflessly and build communities. For all the demands that he put on himself and others, John was deeply compassionate and committed to every generation’s first generation. After all, that was who he was: a first-generation college graduate, a first-generation lawyer, a first-generation trustee. John’s advice would be for each group that has arrived to think of the one coming behind you and from below. Give them the chance you had and pave the way for them.”

About the NJCU Leadership Awards:

Launched in 2018, the NJCU Leadership Awards were conceived to honor, promote, and encourage exemplary efforts by individuals and organizations who have made and continue to make exemplary contributions to our society. NJCU last held the leadership event in 2019, before the 2020 and 2021 events were canceled due to the impacts of the COVID-19 pandemic.

About the NJCU Foundation:

NJCU is wholly dedicated to offering the best, most affordable education to its students, as well as state-of-the-art facilities and campus amenities that augment learning and support personal development. Philanthropic giving is key in making this happen. The NJCU Foundation Board of Directors empowers this work by guiding philanthropic endeavors and serving as ambassadors for NJCU.

NJCU Foundation’s mission is to support New Jersey City University as it transforms itself into a nationally recognized leader in urban public education while maintaining its commitment to transforming the lives and livelihoods of its diverse student body.