NJCU Names Four Leaders to NJCU Foundation Board of Directors 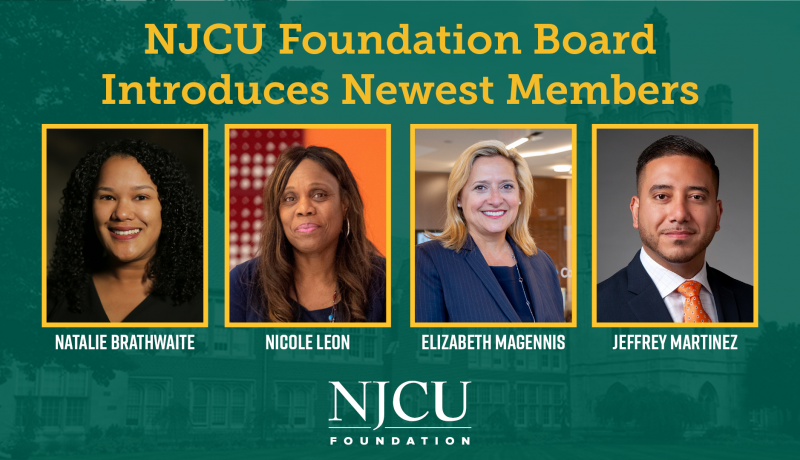 JERSEY CITY, N.J. | New Jersey City University (NJCU) has announced that Natalie Brathwaite, Nicole Leon, Elizabeth Magennis and Jeffrey Martinez have been appointed to the NJCU Foundation Board of Directors. All four appointments have come during the 2021-22 academic year.

Brathwaite is the Vice President of Government Relations and Public Affairs for Fidelity Investments — one of the world’s largest financial services providers.

Leon is the Director of the Office of Diversity & Inclusion at Con Edison, Inc., where she is responsible for providing leadership and support in the areas of diversity, equity and inclusion, and affirmative action, as well as ensuring compliance with anti-discrimination laws and EEO policies.

Magennis is the President of ConnectOne Bank — a leading commercial bank with over $8 billion in assets, serving the New York, New Jersey, and South Florida markets.

Martinez is Executive Vice President and Retail Territory Executive for the East Territory for PNC Bank. PNC is one of the largest diversified financial services institutions in the United States. PNC is a coast-to-coast franchise with an extensive retail branch network and a presence in all of the country’s 30 largest markets.

Peter Hernandez, the Chairman of the NJCU Foundation Board of Directors, said: “I am thrilled to welcome Natalie, Nicole, and Jeff to our Board.  All have hit the ground running, bringing value and support to the university and the Foundation’s goals of expanding philanthropic opportunities. We are also delighted to welcome Elizabeth as our latest leader to the Board and look forward to the impact that she will have as well. All four have been successful in their personal and professional endeavors, and their individual abilities will continue to complement the vision and leadership of the Foundation.”

Brathwaite is the Vice President of Government Relations and Public Affairs for Fidelity Investments, one of the world’s largest financial services providers. In this role, she is responsible for Fidelity’s government relations, community investing and civic efforts for New Jersey and New York and leads the firm’s advocacy and engagement efforts on a wide range of state-level issues related to investment advice. Braithwaite originally joined the NJCU Foundation Board in June 2021.

Prior to joining Fidelity in 2017, Brathwaite spent a decade working in the public sector. Her past roles in both the nonprofit and government sectors in the United States and Canada included work in external affairs, community engagement, grant-making and public policy analysis.

Born and raised in Toronto, Canada, Brathwaite received a Bachelor of Arts and master’s degrees from the University of Toronto. She currently resides in Jersey City where she is active in her community and proudly serves on the boards of the Hudson County Chamber of Commerce, the Hudson County Community College Foundation, Boys and Girls Club of Hudson County,  the Jersey City Arts Council and Saint Peter’s University Board of Regents.

Leon is the Director of the Office of Diversity & Inclusion at Con Edison, Inc. where she endeavors daily to develop and execute diversity strategies aimed at eliminating barriers to inclusion, while constantly evaluating equal opportunity efforts. She also monitors compliance with Equal Employment Opportunity policies and anti-discrimination laws related to harassment and retaliation. Leon originally joined the NJCU Foundation Board in December 2021.

In her current position, she is also responsible for the development and mobilization of the Diversity, Equity & Inclusion strategy, and tracking and reporting on diversity metrics.

Prior to joining Con Edison, Leon worked for over 20 years in the banking industry, in leadership roles of increasing responsibility, including VP of training and FVP, and senior regional manager for retail banking.

She is certified in various leadership and personality assessments and attended the Columbia University Executive Coaching program.  She serves as a mentor in both the LDP (Leadership Development Program) and Corporate Mentoring Programs.

The newest member of the NJCU Foundation Board — joining in March 2022 — Elizabeth Magennis is the President of ConnectOne Bank, the bank subsidiary of ConnectOne Bancorp, Inc. (Nasdaq: CNOB). ConnectOne is a leading commercial bank with over $8 billion in assets, serving the New York, New Jersey, and South Florida markets. Magennis holds over 30 years of experience in the banking industry. As President of ConnectOne, she is responsible for the growth, function, and strategic direction of the Bank.

She joined ConnectOne Bank in 2006 and has played an integral role in growing the company to a top-performing bank with industry-leading metrics. Under her leadership, the bank has experienced record organic growth, expanded its footprint into new markets, built a robust loan portfolio, and made significant strides into the digital space including the launch of online accounts and a cloud-based loan management system. In 2020, she led the Bank’s response to the Paycheck Protection Program (PPP), supporting thousands of small businesses in a time of crisis. Magennis serves as a thought leader in both the banking industry in the business community, speaking on business trends, building high-performance cultures, and the evolving banking model.

Magennis graduated from Ramapo College of New Jersey with a B.A. in Psychology, and St. John’s University with an A.S. in Business Administration. Additionally, Magennis studied at the American Bankers Association (ABA) Graduate Commercial Lending School at Southern Methodist University and trained at the National Development Council with a concentration on Economic Development Finance and Business Credit.

In 2014, she was nominated as an NJBiz Best 50 Women in Business, and in 2019 she was named to Crain’s Notable Women in Banking and Finance. She is also the Treasurer and Executive Board Member of the Manhattan Chamber of Commerce.

Jeffrey Martinez is Executive Vice President and Retail Territory Executive for the East Territory at PNC Bank. Martinez joined PNC in 2014 where he has added more than 19 years of retail banking experience to PNC’s senior leadership team. He also joined the NJCU Foundation Board in December 2021.

In his current role, Martinez manages more than 1,200 branches throughout the East Coast across 11 states and the District of Columbia. Prior to PNC, he held various roles at JPMorgan Chase for more than 10 years, including responsibilities as a First Vice President and District Manager.

A proud veteran, Martinez also served the nation for nine years in the U.S. Army National Guard. He deployed twice in support of Operation Iraqi Freedom and has been awarded three Army Commendation Medals, as well as New Jersey’s Distinguished Service Medal.

Martinez’s commitment to giving back to the community has benefited multiple non-profit organizations. In addition to his service to the NJCU Foundation Board, he is the Treasurer of the Statewide Hispanic Chamber of Commerce of New Jersey as well as a member of the Hudson County Community College Employer Advisory Board.

Martinez is also an executive advisor to the Cuban American Alliance for Leadership & Education, whose mission is centered on supporting education within our community and he works with the Association of Latino Professionals for America to educate students and professionals through informative presentations hosted at New York City universities.

At PNC, Martinez serves as a Chair for the organization’s Corporate Diversity Council, the Military Advisory Council as well as the executive sponsor of PNC’s Latino and Multicultural Employee Business Resources Group.

About the NJCU Foundation

NJCU is wholly dedicated to offering the best, most affordable education to its students, as well as state-of-the-art facilities and campus amenities that augment learning and support personal development. Philanthropic giving is key in making this happen. The NJCU Foundation Board of Directors empowers this work by guiding philanthropic endeavors and serving as ambassadors for NJCU.

NJCU Foundation’s mission is to support New Jersey City University as it transforms itself into a nationally recognized leader in urban public education while maintaining its commitment to transforming the lives and livelihoods of its diverse student body.