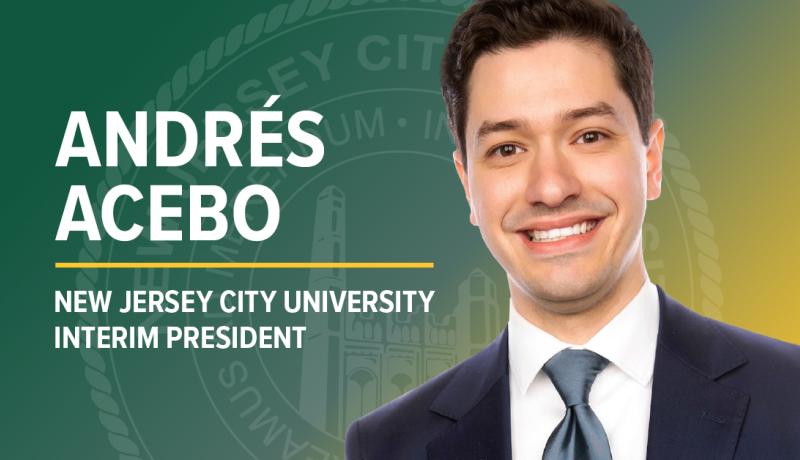 Acebo, a Hudson County native who grew up in Union City, N.J., and has maintained strong ties to the community, will be only the second Hispanic to serve as the leader of a four-year public institution in the state of New Jersey — following in the legacy of another NJCU leader, Dr. Carlos Hernandez, who led the institution as its 11th president from 1993-2012. Acebo, who turns 37 this month, will be the youngest known president to ever lead a public university in the State of New Jersey. The appointment is for 24 months.

Joseph Scott, NJCU Board of Trustees Chair said “After several months of conducting an extensive search for an interim leader of the university to help guide us through the next phase of our fiscal emergency, Andy emerged as the primary candidate for the interim position. We are grateful for his willingness to serve. Andy is uniquely qualified for this moment. His history of accomplishments in our time of crisis are impressive. He has been appointed with unanimous support of the executive committee of the Board. He has the support and full confidence of both the Board and our organized labor units on campus, and an excellent rapport with our legislative stakeholders. He lives the mission of our institution every day, and we thank him for answering the call to serve. Additionally, I would like to express my gratitude to Jason Kroll, who graciously accepted our request to serve as Acting President in late June and has admirably helped guide the ship through challenging waters. The University is extremely appreciative of his efforts.”

​​Andrés Acebo stated: “I am profoundly humbled and honored to accept the call to serve the community that raised me and shaped me. NJCU’s mission is inextricably linked to my life. NJCU graduates educated me, nursed me, protected me, and championed me. This institution delivered for my friends and my family the promise of a better life — a promise that every day, staff and faculty, students, and community leaders and stakeholders, breathe life into. I am confident that that promise will not be deferred, that we will meet this moment, and not just survive challenges, but thrive well into our second century serving my community — our community.

There is no nobler and more humbling opportunity than one that lets you embrace responsibility to serve your community at a time of greatest need. I'm the proud first-generation son of Cuban exiles and a community of immigrants and underrepresented people whose sacrifice and perseverance has been my inheritance. Like thousands of our students and graduates, we pay respect for being worthy of their sacrifices with how we live our lives. I said yes to serving as Interim President because of my deep feeling of conviction and responsibility to give back to a community that has given me so much. In this country and in our community, the promise of education is an equalizing force and while systematic barriers and obstacles exist, and stubbornly persist, I am a living example that for the son of a Cuban farm boy who braved an unforgiving sea in search of freedom, guided with only hope and a compass to chart his life, that with an education, anything is possible — even becoming a university president.”

Antonio R. Flores, the President and CEO of the Hispanic Association of Colleges and Universities (HACU) noted: “We applaud the appointment of Andy Acebo to serve as Interim President at New Jersey City University. NJCU is one of the largest Hispanic-Serving Institutions in New Jersey and Andy’s leadership ability at this time of hardship at NJCU can serve to elevate and strengthen the institution to help pave a path of success and opportunity for future generations of students. We are also very pleased to see a fellow of HACU’s Leadership Academy be appointed to lead NJCU.”

Peter Hernandez, the Chairman of the NJCU Foundation Board of Directors, added: “The Foundation Board welcomes the appointment of Andy Acebo as Interim President. A university is only as strong as its leadership and Andy has a demonstrated record over the last two years of being a strong leader who comes from our community and lives the mission of the university every day. The Foundation looks forward to working with Andy and the university to further its mission and support the lives of our deserving students.” 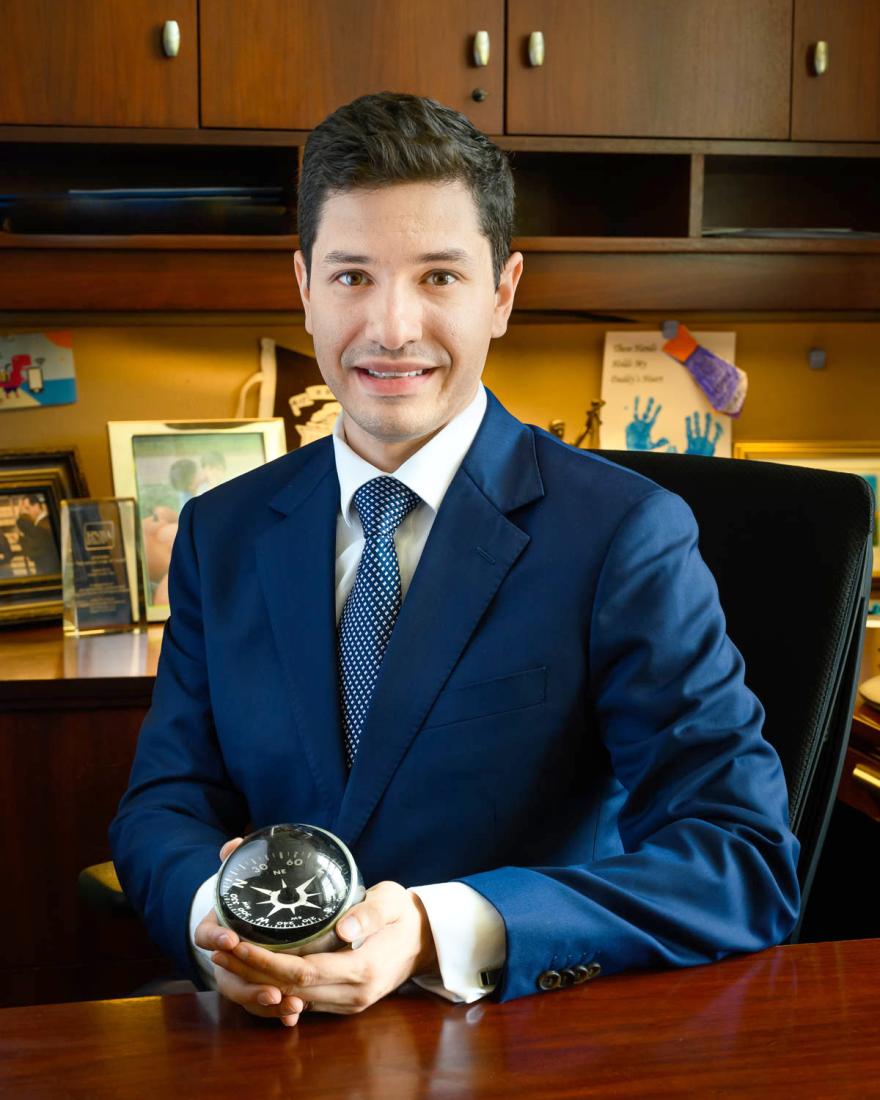 Acebo, who was elevated to Executive Vice President and University Counsel in the midst of the announcement of the university’s current financial emergency on June 27, also served as Secretary to the Board of Trustees and guided its government relations initiatives.

Acebo succeeds Jason Kroll, who had served as the institution’s Acting President since June 28, 2022 and announced in November he would depart the university upon the appointment of a permanent interim president as part of a reorganization of the senior administration.

Dr. Fran Moran, the President of the University Senate, said: “I welcome this announcement. Since the beginning of the current fiscal emergency, Andy has spoken eloquently about his commitment to NJCU's mission and students, and he has been instrumental in promoting open decision making and shared governance. As Senate President, I am confident that this commitment will continue, and I look forward to a productive relationship between the University Senate and his administration. His appointment is another important step in moving NJCU in the right direction.”

Barbara Hildner, NJCU English Professor and President of the AFT Local 1839, added “For the last two years, Mr. Acebo, who currently serves as University Counsel and Executive Vice President, has guided NJCU’s response to the financial and enrollment challenges it faces. He works with all university constituencies, including AFT Local 1839, the union representing professional staff, librarians, and faculty. The University administration, under Mr. Acebo’s leadership, and the Union will continue their efforts to work together in order to support and enhance the excellence of its academic programs and provide students with an education that expands their intellectual horizons and prepares them for a rewarding professional life.”

Since the announcement of the financial emergency, Acebo has demonstrated significant executive leadership. Facing a more than $20 million deficit, he collaborated with NJCU’s organized labor, stakeholders, and constituencies to reduce the deficit by more than 50 percent within 120 days, while leading with empathy and compassion about the mission of the university and those who serve it.

Acebo has worked diligently with NJCU’s other senior leaders, external stakeholders, and entities, including the bond rating agencies which has resulted in the removal of the University from the rating agency’s negative watch. His efforts with the senior leadership of NJCU’s academic affairs division has led to developing an academic rightsizing framework that honors collective bargaining rights and creates a pathway for reallocation of resources and an updated academic portfolio.

He also has worked with the Division of Academic Affairs to affirm NJCU’s Middle States Commission on Higher Education (MSCHE) accreditation while working with Senator Menendez and our congressional delegation to identify significant future federal aid which will provide equitable access to high demand online nursing education.

Leaders from CWA Local 1031, which represents some members of NJCU’s staff, said “CWA Local 1031 congratulates Interim President Acebo and looks forward to continuing to work with him in what we know will be his tireless efforts on behalf of New Jersey City University and the surrounding Jersey City community. We value his willingness to hear all sides when we are advocating strongly for members and negotiating difficult matters. He has demonstrated his commitment to fairness and to negotiating resolutions and we look forward to continuing to work together.”

Thyquel M. Halley, the current two-term NJCU Student Government Association President, and a former student trustee on the Board of Trustees, added: “Being a senior at NJCU, I have seen the institution undergo many changes, both good and unimaginable. Even so, NJCU has managed to remain resilient in ensuring the academic success of its students and the quality of their campus life experience. This is evidenced by the announcement that Andrés Acebo has been appointed Interim President. Andrés comes from the community and has a vested interest in the demographics of NJCU's students. As the SGA Executive Board moves forward, we look forward to working with Interim President Acebo and the entire administration.”

Acebo, who recently completed a one-year fellowship program as part of the third annual cohort of the Hispanic Association of Colleges and Universities (HACU) Leadership Academy/La Academia de Liderazgo in Spring 2022, was one of just 25 fellows selected nationally.

Acebo originally joined the university in February 2021 as a senior leader facilitating institutional planning, policy and program development and was responsible for facilitating effective decision-making and coordinating the execution of strategic initiatives, while providing close coordinative support to the President as an ongoing liaison for external governmental affairs issues. As Executive Vice President, he continued those critical contributions.

Acebo most recently served on the vetting and due diligence team for the Hispanic National Bar Association (HNBA) and Alliance for Latinx Leadership and Policy (ALLP) partnership to identify U.S. Department of Justice presidential nominees for the Biden/Harris transition.

Acebo has been recognized as a Rising Star by New Jersey Super Lawyers, a Top Latino Lawyer by Latino Leaders Magazine, a Top Lawyer under 40 by the Hispanic National Bar Association, and as a Diverse Attorney of the Year by the New Jersey Law Journal. In Fall 2022, he was recognized as a 2022 “Latinos 40 Under 40” award recipient by Negocios Now, in recognition of leadership by young Latinos in the New York metropolitan area. This fall, Acebo was also honored by the Boys Scouts of America-North Jersey Council with the 2022 Good Scout Award, in reflection of his service to his community.

He currently serves as a Deputy Regional President of the Hispanic National Bar Association and Chair of the Special Committee on Cuba. He serves on the board of the Cuban American Alliance for Leadership and Education (CAALE) — a non-profit board that serves first-generation students in the NJCU community.

Furthermore, Acebo serves on the board of the North Hudson Community Action Foundation, which helps underserved members of Hudson County with equitable access to healthcare and social services.

In addition to his professional accomplishments, Acebo lives the NJCU mission every day, as a first-generation college student, who has a similar life story as many of our current students. His family story began nearly 60 years ago when his father fled Cuba for freedom, and his path to NJCU was recently depicted in a feature in Hispanic Executive and in an NJ.com Op-Ed entitled “A father’s story and a son’s promise.”

Acebo holds a B.A. from Brown University and a Juris Doctor from Rutgers Law School. He is a proud product of Union City public schools in Hudson County. He resides in North Jersey with his wife — an NJCU alumnae — and three children.

About NJCU:
New Jersey City University is an institution of higher learning dedicated to the development of our students, our city, our communities, and our state. We are a game-changing force for our students and have been recognized as one of the top colleges in the nation improving their upward economic mobility. Whether enrolled in one of our undergraduate, graduate, or doctoral programs at our three locations, NJCU students have access to an affordable, diverse environment, and an exceptionally supportive faculty. This prepares them to go on to become the next generation of workers and leaders who improve their communities and the State of New Jersey.