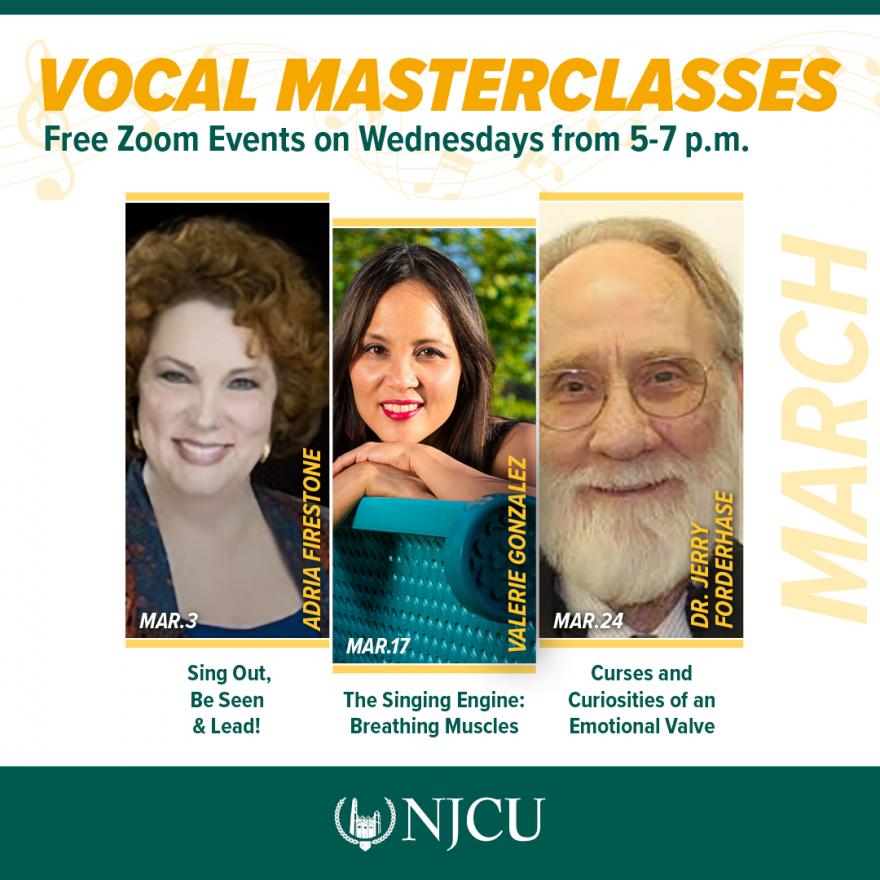 The Voice area of the Caroline L. Guarini Department of Music, Dance and Theatre recently held its first series of Voice Masterclasses, featuring five of our voice instructors. The classes, which were free and open to the public, took place on Zoom, on Wednesdays in February and March.

Each clinician featured a different topic of interest to singers. Topics ranged from use of breath to movement, self-confidence and emotional expression.

The first masterclass, on February 17 featured Mark Nicolson, who worked with students on “Audition Preparation and Phrasing.” Mr. Nicolson brought his considerable experience as an internationally known tenor, artist manager and teacher to this informative class.

On February 24, Justyna Giermola presented her class on “The Use and Correlation of Body Movement and Technique.” Ms. Giermola has performed in opera houses all over Europe and the United States. She maintains a private studio in addition to her college teaching.

Adria Firestone presented a master class on March 3 entitled “Sing Out, Be Seen and Lead: The Value of Your Voice and Your Training in Your Life and Your Work.” Ms. Firestone has sung in countless opera houses throughout the world and is the author of several books providing help to performing artists and other professionals.

On March 17, Valerie Gonzalez presented “The Singing Engine: Breathing Muscles,” an in-depth look at the anatomy and use of many muscles in singing. Ms. Gonzalez has had a successful opera career throughout Europe, Canada and the U.S. She maintains her own voice studio in addition to her college teaching.

The series concluded on March 24 with Dr. Jerry Forderhase, whose topic was “Curses and Curiosities of an Emotional Valve.” He presented an approach to vocal instruction that emphasizes understanding of the muscles of the throat, while finding the natural voice. Dr. Forderhase has taught privately and at Newark Arts High School for many years. His students have gone on to sing at the Metropolitan Opera, in Broadway musicals and in many other places.

The series was moderated by Dr. Robert Prowse, Coordinator of Choral Studies at New Jersey City University, and would not have been possible without the considerable organizational talents of Erica Seitzman, MDT Program Assistant. Dr. Amparo Fabra, MDT Chair, was on hand to answer questions and provide information about the department.