Marketing majors are standouts in the classroom and leaders on the court, track, course, field, and arena. With their deep understanding of Marketing and participation in sports at a high level, NJCU Marketing student-athletes are well prepared for careers in sports marketing, reputation management, recruitment, strategic communication, branding, social and digital communication, marketing research and more.

Check out some of the NJCU Marketing majors who have seriously "got game!"

Polina Agutina has a strong family connection to both her sport and her major. Her grandfather, Alexander Agutin, a famous coach in Ukraine, trained four Olympic runners and was her first coach. Her father’s business career and guidance added to her interest in business and specifically in Marketing.

Now at NJCU, Agutina is honing her long jumps and sprints, and building her Marketing expertise.

“On the track, Polina is focused on her take off technique and her runway approach,” said Patrick O’Neill, Head Coach, Men’s and Women’s Cross Country and Indoor & Outdoor Track and Field. “Polina has an outstanding work ethic which led to a breakthrough season.  However, she is not done yet. Last year left her hungry for more and she will be looking to top her accomplishments.  She has big goals going into this track season and she has put herself in a position to have the best season of her career.”

In the classroom, Agutine is just as focused on improving her skills as she is on the track. She plans to take advantage of the Marketing Department’s Mentor Match Program as she completes her undergraduate degree. The program connects Marketing students to faculty mentors for customized mentorship. She also hopes to continue to hone her Marketing skills by earning a master’s degree in the field.

“My father leads a candy company and I have always enjoyed hearing about his workdays,” said Agutina. “The marketing elements of his work interested me the most and so when I transferred to NJCU from Hudson County Community College, I selected the Marketing major. I loved the Principles of Marketing class and am eager to take more classes in the major.”

“Competing on the track is like life,” said Agutina. “The start can make you nervous and adrenaline-filled. Sometimes you doubt yourself – but then you just perform and do your event and get more confidence and motivation. Coming to the United States as a young girl, starting a job, using my English more and more, joining NJCU Track and beginning my Marketing major … the more you focus and do it, the more confidence you get.”

Elizabeth Bello moved to Jersey City from Brooklyn when was just starting elementary school. While a sophomore at Innovation High School who played soccer and bowled, she wanted to explore a different sport. Bello tried golf and was immediately passionate about the sport, deciding she wanted to pursue golf as a college athlete.

Bello earned a full scholarship to NJCU prior to the University having a golf team. Soon after she arrived on campus, however, she learned NJCU was starting a golf team and reached out to the coach.

"Elizabeth reached out to me with her interest and excitement about joining our new golf program,” said Joe Yeck, NJCU’s Head Men’s and Women’s Golf Coach. “Early on it was evident to me that Elizabeth is everything you want in a student-athlete. She is responsible, dedicated, team oriented, coachable and most importantly wants to excel both on the golf course and in the classroom. This led to an easy decision to announce her as our first ever Women's Golf Captain. We are thankful she is a part of building our program!"

“The same drive and enthusiasm Elizabeth has the golf course is evident in the classroom,” said Sue Williams, NJCU Marketing Professor. “She pursues her studies with serious focus and consistently reaches her goals. She is destined to be a very successful Marketing professional.”

“I have always felt like I would one day be a business professional,” said Bello. “At NJCU I started off common core classes and got into a Marketing class with Professor Williams that I really enjoyed. I then took Consumer Behavior with Dr. Sevincgul Ulu and that added to my interest. I needed to learn more!”

Bello describes the Marketing Department as a tightly connected network that has students’ career interests always at the center.

“I choose NJCU because it was a relatively small school where I could benefit from close contact with faculty members,” continued Bello. “As a Marketing major with two Concentrations (Marketing Analytics and Digital Marketing), I learn from experienced professors who are always looking for ways to help students succeed in the classroom, add real-world work to their portfolios, earn stackable credentials, build career networks, and advance. It’s a great support system.”

Julian Fernandez took a Sports Management and Marketing class at Union High School that showed him he could combine his passion for sports (he is an avid Yankees/Giants/Knicks fan and has played baseball for “as long as he can remember”) and his interest in Marketing into an enjoyable and lucrative career.

At NJCU, Fernandez is pursing that career, fine-tuning his skills in Marketing classes, attending Career Fairs for students interested in working in the sports industry, seeking internships, and learning about the career-enhancing opportunities available in the Marketing Department that will help him prepare a competitive resume and portfolio.

“While a high school class got me hooked on Marketing, NJCU classes like Principles of Marketing and Consumer Behavior got me even more interested,” said Fernandez. “I love Marketing’s connection to people and clearly see its place and impact on the sports industry. Now is the time to take advantage of all that the NJCU Marketing Department has to offer in terms of preparing to earn stackable credentials, getting internships, developing a network and participating in organizations like NJCU PRSSA to hone my skills and to ensure I am competitive in the workplace.”

According to Jerry Smith, Head NJCU Baseball Coach, Fernandez has grown as both a person and player as a pitcher on the NJCU Baseball Team.

“Julian has found ways to step out of his comfort zone,” said Smith. “As a result, he has closed the gap between where he started and where he hopes to end up. Furthermore, as a teammate, Julian always remains respectful, appreciative, and patient. In short, he has a become a better player and a better person, thus illustrating the ultimate goal of a student athlete.”

Fernandez finds NJCU’s relatively small community a plus as an athlete and student. “Everyone knows everyone in Athletics,” he said. “Every athlete on every team is supportive of one another. You can go to anyone on any sport and they will help you. It’s unique for a university athletics program. The same is true at the School of Business. It’s a small and supportive community – and you can’t beat the skyline view!”

Fernandez is currently seeking an internship in Sports Marketing. 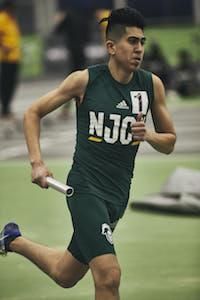 Jose Recinos learned early in his time at Union City High School that the path to getting to where you want to be is not always straight.

While soccer was Jose’s first sport (he started playing at four years old), when he got to high school, he missed the chance to try out for the freshman team. In preparing to tryout the following year, he started running track and quickly realized both his potential for success in the sport and his love for running.

Jose remained on the track team for the rest of high school and found his way to the NJCU team in his sophomore year of college.

“Jose is an outstanding leader both on and off the track for us,” said Patrick O’Neill, Head Coach, Men’s and Women’s Cross Country and Indoor & Outdoor Track and Field. “This led to an easy decision to announce him as one of our captains this fall.  He has been an integral part of our team’s success and has played a key role in all our competitions this fall.”

“Everyone on the NJCU Track team is welcoming,” said Recinos. “It’s a great atmosphere in which people are super supportive and super chill.”

Jose applied to NJCU at the advice of Ms. Maker, his high school Science Supervisor. While he was accepted to several universities, he worried about the financial implications of attending them. Ms. Maker suggested NJCU for its academic reputation and affordability.

Sara Zorzan, an NJCU Marketing Major from Milan, Italy, feels very much at home on the NJCU Women’s Tennis team. Sara’s sister, Giada, who transferred to NJCU from Southern Arkansas University, is also on the team. NJCU Women’ Tennis also includes a third player from Milan (who Sara did not know until they met in Jersey City).

“Our team is very international – like the university community in general,” said Sara. “In addition to the three of us from Italy, we have players from India, New Zealand, and California. We are strong and supportive teammates who are also experiencing a lot of new and exciting things together as international students.”

Since enrolling at NJCU, Sara has enjoyed the many opportunities the University offers to international students to experience “very specific American activities.”  These have included a Haunted House for Halloween, a Yankees game and more.

Her ability to focus and strategize also make Sara a valuable member of the tennis team.

“Tennis being an individual sport, a person's characteristics really show through on the court like they would in their lives off the court, and this is especially true with Sara,” said Nick Margiasso, Head Coach of NJCU Tennis. “Sara brings a hyper focus and all-in attitude to every aspect of everything she does in her training, matches, and in her role as a young team leader. Her maturity and mental strength overall she brings between the lines is something that will grow and she can use in whatever she does the rest of her life.”